The Must Farm Settlement excavation is an ongoing project being carried out by the Cambridge Archaeological Unit with funding from Historic England and Forterra. The project is investigating an exceptionally well preserved settlement dating to the Late Bronze Age (1000 – 800BC). The site itself sits on the edge of a working quarry at Whittlesey, just outside of Peterborough.

The site was first discovered in 1999 when a local archaeologist noticed a series of wooden posts sticking out of the quarry’s edge. This initial discovery led to a small evaluation in 2004, before a larger one followed in 2006. This excavation not only revealed incredibly well preserved artefacts but gave us a real glimpse into life during the Bronze Age.

The 2006 evaluation only scratched the surface of the site but it provided some truly extraordinary discoveries. The settlement consisted of houses built on a series of piles, or stilts, sunk into a river channel below and seems to have been built between 1000 – 800BC. Around the edge of the settlement a palisade, consisting of large ash posts, was constructed in situ, leaving the debris at the bottom of the slow-moving river. As the site is situated on the edge of a brick pit, some of the settlement has been historically quarried away at some time in the last century, leaving approximately half.

At some point, perhaps as little as six months, after the settlement was built a fire tore through it, causing the homes to collapse and drop into the river below where the flames were immediately quenched. As the material lay on the riverbed it was covered with layers of non-porous silt which helped to preserve everything from wooden utensils to textiles. It is this degree of preservation which makes the site fascinating and gives us an unprecedented insight into life during the Bronze Age.

Whilst pottery is a common find from almost any archaeological dig, the ceramics recovered from the 2006 evaluation were truly fantastic. There was a wide variety in form and function, from large storage vessels to beautiful, tiny “poppyhead” cups from the Late Bronze Age. There were also some exceptional discoveries, notably preserved pieces of clothing that had survived for 3,000 years. These textiles had survived as a consequence of the fire charring the fibres and water extinguishing them. Analysis has shown that rather than using animal fibres these fabrics were created from plant fibres.

Not only did the 2006 evaluation provide us with fascinating material culture it also gave us glimpses into specific moments of the fire that destroyed the settlement. A bowl was found that still contained the remains of a meal, complete with the spoon that was being used to eat it, which was most likely abandoned as the fire broke out. Similarly, some beautiful beads survived the fire but the temperatures of the blaze were so high that many had partially crystallised or shattered. It is these unique moments that open up a window directly into the past that help to make the Must Farm settlement truly exceptional.

After the 2006 evaluation, it was agreed that the site would be preserved in situ as this was the best way to ensure the survival of the archaeology. However, routine monitoring of the ground conditions over the next few years raised some concerns over the preservation conditions. A decision was made to excavate and fully record the site, to ensure no information or material was lost. The excavation began in August 2015 and ran until August 2016, thanks to the financial support of both quarry owners Forterra and Historic England.

Excavation has revealed some of the most extraordinary Late Bronze Age archaeology ever discovered in Europe, with many unparalleled finds including textiles, wooden artefacts and metalwork. The settlement appeared to be the dwelling place of a number of families and the material left behind gives us an amazing insight into the everyday lives of people in the Fens, 3000 years ago.

The stilted structures that they lived in were round and raised above the river which would have run underneath them. The floors were likely springy and made from wattle panelling, similar to the walls of the buildings and their roofs were composite; made from a mixture of thatch, turf and clay. The palisade around the outside of the settlement was created using ash posts that likely came from managed woodland.

Inside, the homes would have been filled with artefacts ranging from carved wooden items and pots to metalwork and fabric. The pots are mostly complete and incorporate larger storage and cooking vessels alongside smaller and more delicate bowls and cups. The wooden artefacts are astonishing, including a miniature wooden box, two wheels and a plethora of platters and containers.

Must Farm also has the largest, and finest, collection of textiles from the British Bronze Age. These extremely delicate objects were preserved by the unique combination of charring and waterlogging resulting from the destruction of the settlement. The fibres and fabrics are incredibly useful to study as they reflect different aspects of the production of textiles, from the initial stages through to the finished objects.

The settlement yielded the largest assemblage of domestic metalwork from Britain, including axes, sickles, gouges and razors. Metalwork from the Bronze Age is rarely found associated with settlement, so these artefacts are particularly important in the study of household inventories. While domestic metal objects are the most common, weaponry has been found including swords and spears, some of which are still hafted.

During the excavation an earlier feature of the site was also discovered, a large timber causeway similar to the nearby Flag Fen. This raised wooden walkway pre-dates the settlement and one of its timbers was felled between 1290 – 1250BC. The causeway is made from enormous oak uprights, many of which have handles shaped into their sides. There is metalwork deposited alongside the wooden walkway, including swords and spears; a practice well known from the Bronze Age.

While the dig has finished, the lengthy task of post-excavation analysis is just beginning. We have a vast amount of information to examine and analyse, including records of thousands of pieces of wood, hundreds of finds and a wealth of environmental data to investigate. There are dozens of specialists working on the post-excavation process and we have a large number of questions to tackle.

Over the coming months, and years, we’ll be working to understand every aspect of the Must Farm settlement, from the activities that took place there to the events surrounding its destruction.

We also regularly update our diary pages with more detailed posts describing different elements of the Must Farm project.

If you have any questions or enquiries you can find our contact details here. 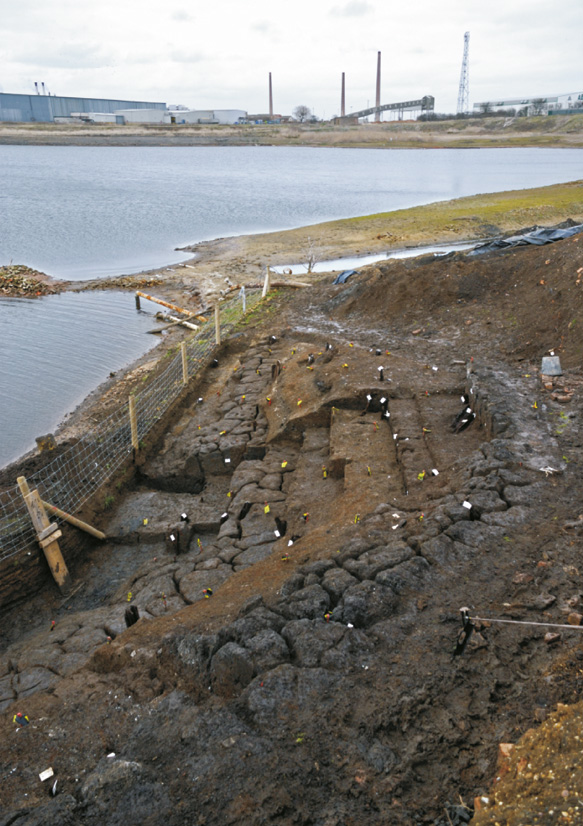 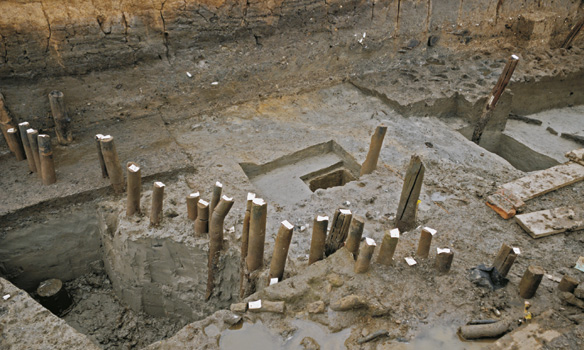 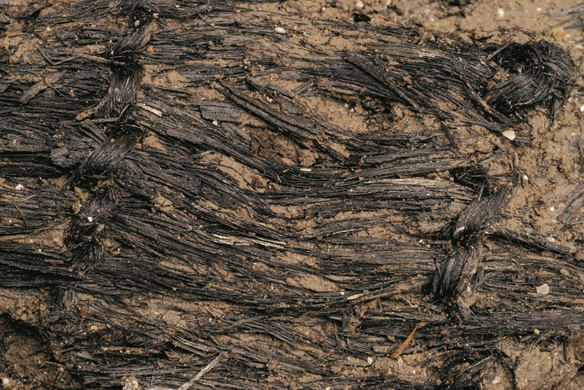 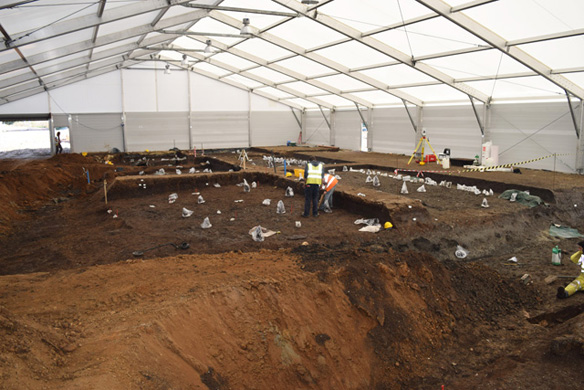 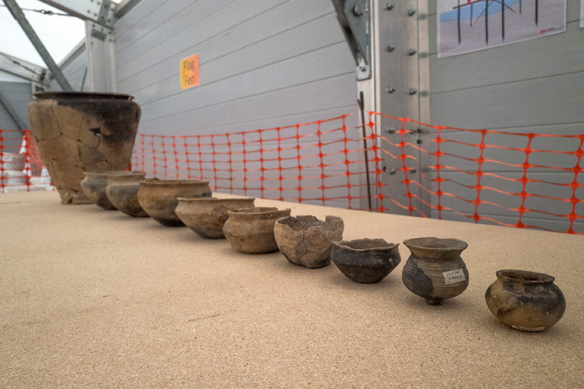 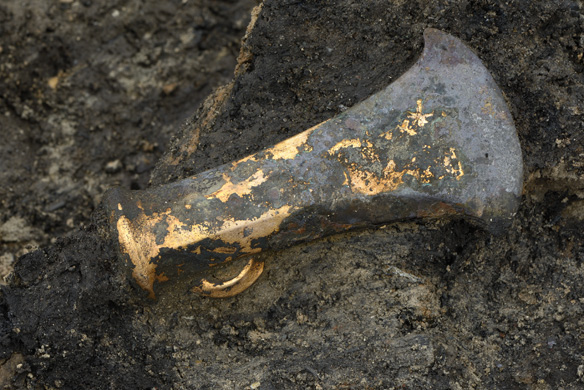 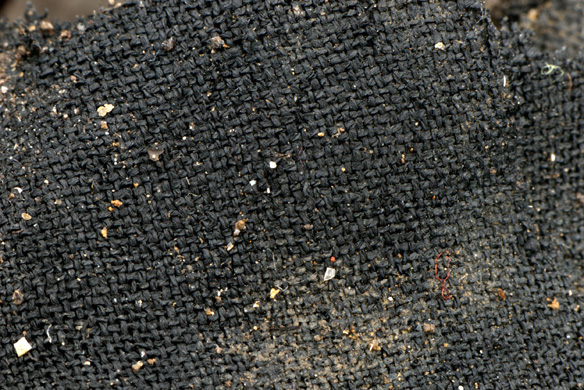 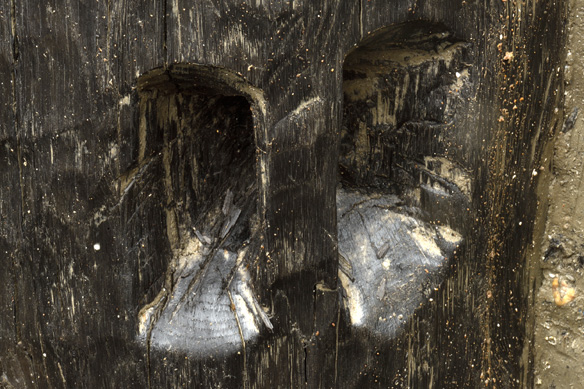