Refitting fragmented artefacts from a settlement context enables a more refined understanding of scale: how many pots? How many animal carcasses? What is missing? And what do the missing elements tell us about past butchery or refuse practices?

Our understanding that the site was short-lived meant that the pots and butchery remains came from a defined timeframe (perhaps as little as a year). The site’s short lifespan made knowing the number of vessels or animal remains all the more important as this allowed us to think about the ‘use and flow of things’. How many pots were broken? How many were in use. How many wild boar were eaten?

This information would allow us to think about the scale of settlement, the availability of resources, dietary preferences and so on. Refitting animal bones and pottery sherds back to individual vessels or animals did not just generate an inventory of artefacts, it allowed us to refit activity at the site. Refitting pottery assemblages from archaeological contexts is a technique of analysis commonly practiced but refitting entire animal bone assemblages is unusual.

The excavations at the Must Farm site revealed a varied assemblage of artefacts consisting of metalwork, textiles, animal bone, pottery and much more. While many of the objects were found in remarkable condition others were fragmented or disarticulated, especially the large assemblages of pottery and animal bone. Many showed signs of being broken during the fire that destroyed the settlement, such as signs of charring or scorching. 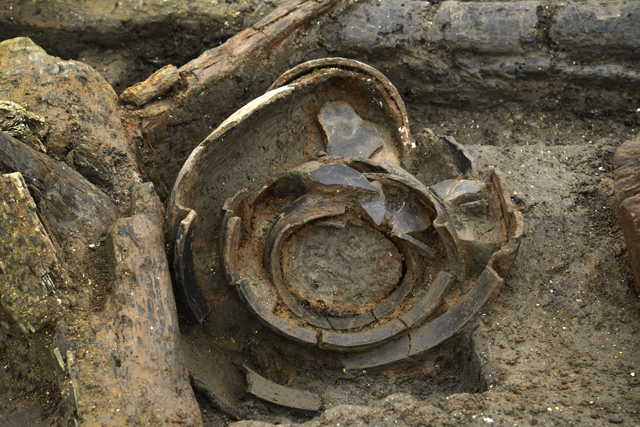 Not all artefacts were found complete and would require refitting, such as this broken set of nested vessels.

To understand the broken fragments of artefacts and material, different forms of analysis are required to help answer important questions. How did they end up in this condition? Were these objects refuse that had been discarded prior to the fire or did they end up in this condition because of the blaze? Are there visible patterns to the breakages and distribution of material? One of the best ways to explore these questions is to carry out refitting.

Refitting is the process of gathering together the recovered pieces of different artefact types, such as animal bone, pot sherds, flint and so on, and trying to put them back together: to re-fit them. Refitting is very similar to a 3D jigsaw puzzle with several particularly interesting challenges. Using this analogy, when we begin the process we don’t know how many pieces there may be, whether we have all of them and we certainly don’t have the picture on the front of the box. It is true however, that we do have the sense of ‘whole’ object: a single storage jar or a Red Deer skeleton.

Other complications are present too. With more fragile materials such as bone and delicate fineware pots, the pieces can have been seriously damaged over time. It is easy for the fabric of these finds to be crushed and splintered, making it extremely hard to match pieces back together. Similarly, artefacts can be altered by the effect of the fire, changing their colour and even texture, further confusing matters. Importantly, these transformations also represent aspects of the artefacts history or use.

Before the refitting process begins it is important to ensure that every fragment is individually numbered. All the finds recovered during the excavation had their location carefully plotted in three dimensions, allowing us to know precisely where each piece was originally discovered. Uniquely numbering each find makes it possible to keep track of every fragment and it is vital to ensure these objects remain associated with their original context. 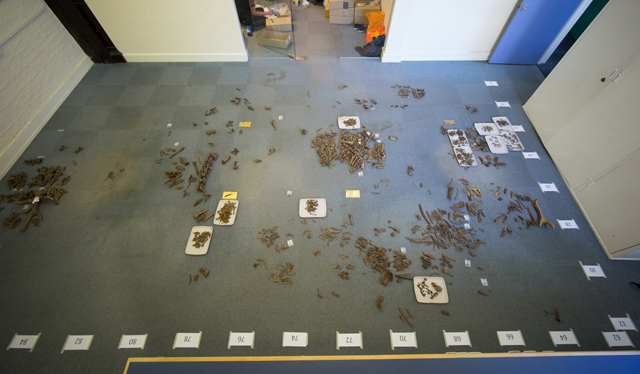 Part of the Must Farm animal bone assemblage laid out and ready for refitting to begin.

Once this is done, a material type is selected and arranged in an open area. To make things easier finds are laid out based on their original spot of discovery during the excavation, using 1x1m grid squares to help group fragments together. Pot sherds from within the same grid square are more likely to refit together, as when a vessel breaks the pieces will tend to stay grouped. However, this is not always the case and it is often possible to find pieces that refit that may have been separated by significant distances. The locations of finds that refit is important and can help shed light on how the material ended up in its position or, in the case of refits over distance, how it became separated.

When the material has been arranged, it is then a methodical process of looking for similarities within the artefact types. Using pottery as an example, it is best to focus on the colours of sherds alongside their fabric type (this could come down to feel as much as appearance). Typically, we focus on individual vessels at a time trying to first piece together their bases and rims. Doing so is like working on the edges of a jigsaw before moving inwards. This process is time consuming and requires a great deal of concentration and it is sometimes necessary to move to another vessel before coming back for a second attempt.

Refitting is complicated and needs a lot of patience, especially when there are thousands of fragments to work with. Having specialists carry out the process is also important as they can use their knowledge to help guide the refitting. For example, the Must Farm pottery is remarkably uniform and similar, making it more difficult to differentiate the sherds of one large storage vessel from another. Pottery specialists familiar with the assemblage can recognise subtle similarities within sherds that may not be obvious to the untrained eye.

Refitting animal bone is different from refitting pottery as the reduction of animals to bones through butchery was a deliberate act while the breaking of pots would have been unintentional during their use. With animal bones two types of ‘refit’ were possible: 1) the articulation of different skeletal elements of the same limb or body part (like reassembling vertebra, or a mandible and maxilla) and 2) re-joining of split or butchered elements (like the two ends of the same tibia). 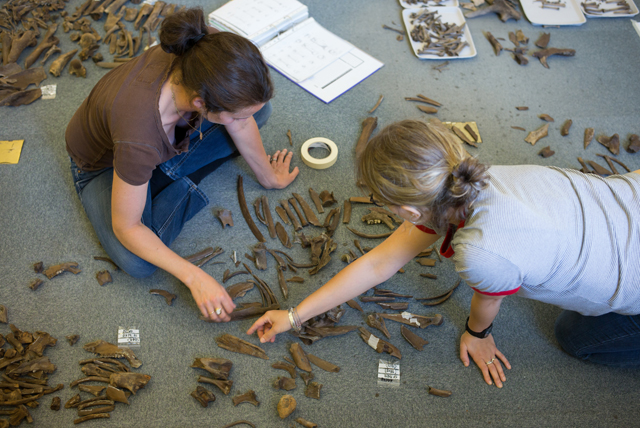 Searching for refits amongst the animal bone

With animal bone refitting, absence of certain elements is as significant as being able to refit a whole leg or whole animal. The absence of parts is indicative that the killing and first stages of butchery was occurring off-site.

The first material type that was laid out for refitting was Must Farm’s faunal assemblage. At first it was unclear how much animal bone could be refitted as it tends to break and splinter, making it very difficult to piece back together. Yet, the process proved extremely valuable and seeing the bone assemblage complete in one location was essential for analysis and interpretation. A total of just over 40 refits were found in the faunal material representing a range of different animals.

A particularly interesting match came from a wild boar, where it was possible to match its forelegs showing that the bones came from the same animal. Elsewhere on the site refits were made from red deer bones. The refitting exercise helped to increase our understanding of patterns that were only beginning to emerge on-site during the excavation. Perhaps the most prominent feature of the animal bone was a preference for wild meat rather than the domestic types typically associated with sites of this period in the Bronze Age.

Despite the presence of some domestic animals, including pigs, there is a surprising amount of red deer and wild boar in the assemblage. From these remains it seems that the inhabitants of the site had definite preferences for certain joints of meat with red deer and boar forequarters present in several of the houses. The butchery of these cuts was all done in the same manner and in the case of the red deer the venison leg/elbow all came from different animals. This raises the question of where the rest of the meat and remains of these animals ended up? Could it have been in the now missing half of the settlement that was removed by historic quarrying?

It may be that Must Farm’s inhabitants preferred certain cuts of meat and were able to choose the ones they wanted. Around the outside of each of the site’s structures is a “halo” of bone fragments that seem to reflect the waste of meal preparation. This seems to suggest that the main butchery occurred away from the settlement with refinement and reduction occurring inside the structures prior to cooking. 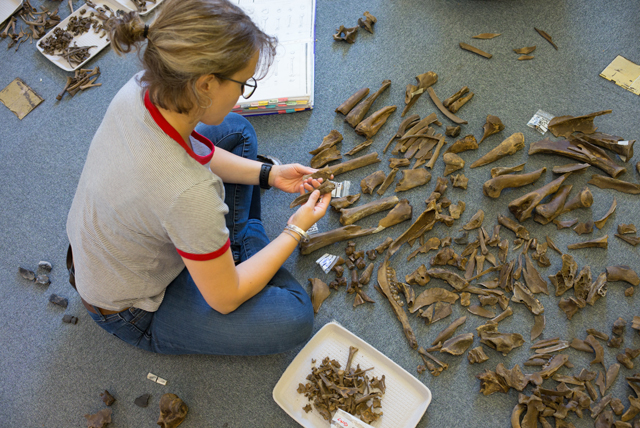 There is a lot of variation in the size of animal bone to examine for possible refits, from small bones and splinters to much larger leg bones.

Our increased understanding of the conditions of the river above which the settlement was built has also raised some further questions. Owing to Must Farm’s presence in a watery environment, many had previously thought wild birds would have been an element of the diet. When we found few bird bones during the excavation some suggested they would have been washed away owing to their light weight and small size. However, many extremely small splinters of bone and other light remains were recovered which suggests the absence of bird bones is not a consequence of the preservation.

Examining the faunal remains during the refitting process has further emphasised the prominence of dryland, woodland species rather than wetland ones in the wild animal bone at Must Farm. Despite a small presence of domestic animal remains, it seems clear there was a definite preference for wild meat among the site’s inhabitants. Does this reflect some form of specialism? Why does this site’s assemblage differ from so many other Late Bronze Age ones? As post-excavation work continues we are continually finding new questions to ask and the whole team is busy exploring more material to try and provide answers.