During the excavation of the pile-dwelling settlement we discussed how valuable visualisations of the archaeology were (see Dig Diary 24: Visualising the Site). Using photography, photogrammetry and illustrations enabled us to efficiently record material, help us to identify important elements to investigate and scrutinise the archaeology at different scales. Not only were these three techniques essential while we were still on site, but they are just as important during the post-excavation process.

Broadly speaking, photogrammetry is the technology of obtaining three-dimensional information from photographs. Within archaeology the technique is often used to generate models by processing hundreds of photographs of an area or object. By taking photographs that overlap with one another and include common subject matter it is possible for software to stitch these together and create 3D models of an artefact or area of an excavation, which with the use of control points can be scaled. 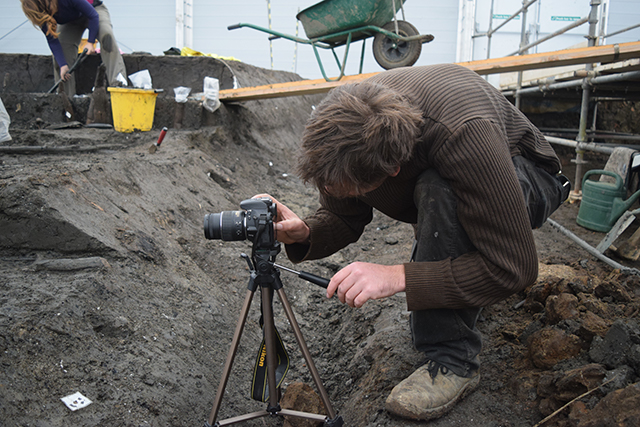 Photogrammetry being carried out during the excavation

We used this technique at Must Farm to generate 3D models of each different context we encountered across the entire site. This effectively gave us a complete digital model of the pile-dwelling settlement from the first archaeology encountered to the last artefact removed. These were broken up into smaller areas to make the processing of the photographs easier and faster and formed the foundation of the physical plans we used to record the site, including everything from tiny woodchips to enormous timbers. When more delicate artefacts were found, or dense areas of environmental remains encountered, we would create more detailed models of this archaeology prior to its removal. This ensured that we had a 3D record of it in situ that we could consult later.

Using photogrammetry helped to speed up our recording of complex, dense archaeology and created a body of detailed information that has proved invaluable during the post-excavation process.

With the archaeology of the pile-dwelling now recorded, removed and the site reburied we are truly dealing with post-excavation. Having a series of highly-detailed 3D models of each area of the site (showing every context we uncovered) is an incredible resource that has played a huge part in developing our understanding of Must Farm’s archaeology.

During the 2015-16 excavations we encountered “caches” of seeds and grains that included barley, emmer wheat and flax. These caches have been examined by several specialists and we discussed some of this work in our last blog entry (see Post-Ex Diary 17: Stable Isotope Analyses and Must Farm). Some of these charred plant remains were specifically recorded using photogrammetry, prior to their removal for sampling. Once the overall importance of these caches was recognised we were able to reprocess our existing images and produce models of all the plant remains, even those that had been excavated. 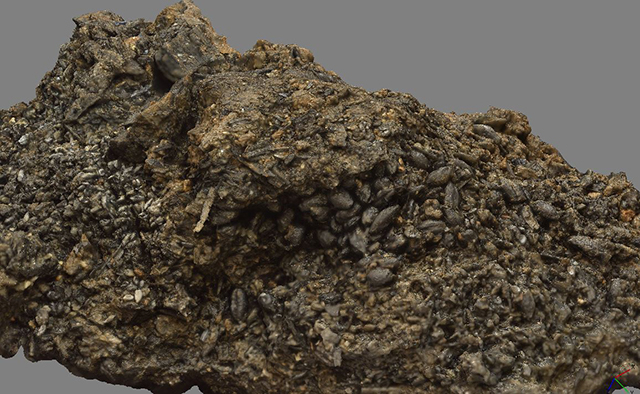 3D model of one of the in situ seed caches

This has proved to be valuable as 3D models of them have been created and shared with the respective specialists. This has enabled them to have a better understanding of the caches’ contexts even though the remains were sampled and removed several years ago. The models allow an extra level of interpretation of the material as they can be navigated around to gauge depth, texture and to see precisely how these deposits might relate to layers above and below them.

Given the time pressures, scale of the excavation and the busy schedules of people involved with the project it was not possible to invite every relevant specialist to site each time we encountered something of potential interest. However, producing 3D models derived from photogrammetry allow specialists to better understand their relevant material in situ by providing them with detailed, movable snapshots.

The nature of photogrammetry also means that we can reprocess areas at greater scale to enable more fine-grained examinations of the archaeology or material. If we discover something particularly interesting about an artefact or some material from the excavation from a piece of scientific analysis, we can reprocess the images we have at an increased (or decreased) resolution. We can then re-examine it as it was in the ground and see if we can draw any new conclusions or obtain any further information. 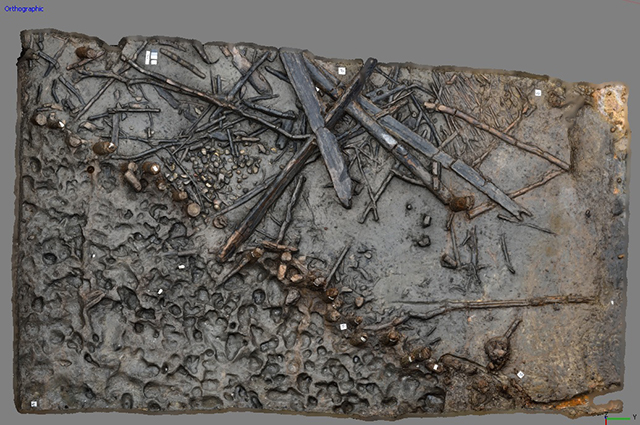 A 3D model of one area of the Must Farm pile-dwelling settlement showing some of the timber debris, the palisade and an area of preserved footprints.

Currently when we examine the 3D models of the site they are broken up into the different areas of the pile-dwelling settlement. This was done to aid our excavation and recording. During the post-excavation process we are hoping to unite these fragmented sections and create models of every context across the settlement. It is time-consuming to stitch these areas together and process the models. However, we’re hoping that these “complete” 3D representations of each layer of the archaeology will provide valuable, detailed overviews of the excavation.

The photogrammetry record of the site itself allows us to move beyond the 2D record and explore the 3D aspects of the pile-dwellings’ archaeology: morphology, texture and a fresh ability to scrutinise a site that has been now reburied.

Alongside the photogrammetry we carried out on-site we have also been using the technique on artefacts during the post-excavation process. This proved highly useful during the refitting exercises we carried out in 2018. These intensive projects, to refit complete pots from thousands of broken fragments, were complex and required a lot of teamwork to carry out. We only had a limited amount of time (and space) to examine the completed vessels before they were broken back down into sherds and re-bagged for storage. Carrying out photogrammetry on the refitted vessels gave us highly detailed models that we can continue to consult and study even though the physical pots have been returned to their component pieces.

These models allow us to scrutinise the pots down to the millimetre level where we can see minute details that can provide evidence for burning, breakage, manufacture and even repairs. The digital nature of the 3D models allows specialists to examine them before seeing the actual objects, enabling them to identify areas of interest and important features for further study. 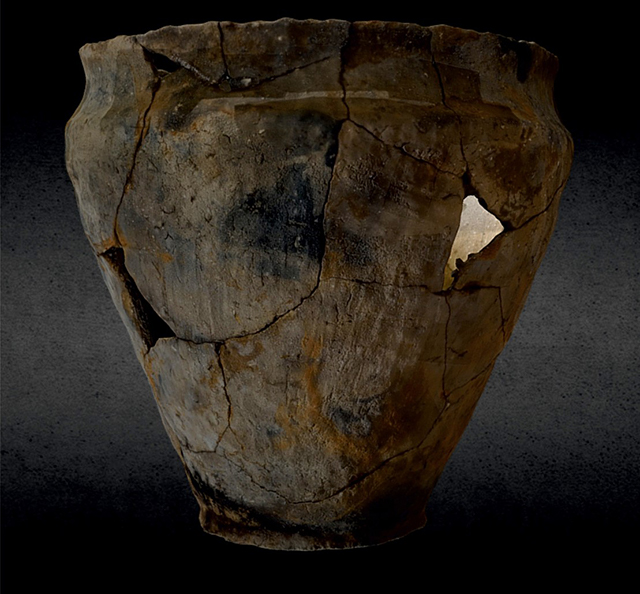 A 3D model of one of Must Farm’s large storage vessels.

From early analysis of the pottery models we have been able to identify differences in burning patterns on the vessels. This suggests that some of the pots were already broken before the fire and that some of the fragmented pieces were subjected to the fire whereas others were not. When we combine this with the GIS information from the excavation, we can locate each of these individual fragments and, potentially, begin to understand more about the settlement and the fire that destroyed it.

One of the other artefact types we have been using photogrammetry on are the flint objects that we’ve discussed previously in Post-Ex Diary 9: Specialist Analyses Part Two. Our current interpretations of these artefacts are that they were used for working wooden objects, using them as a “static” file or rasp. They are challenging artefacts to understand as the fire at the settlement heated the objects before they fell into the cold water below, causing them to shatter from thermal shock. 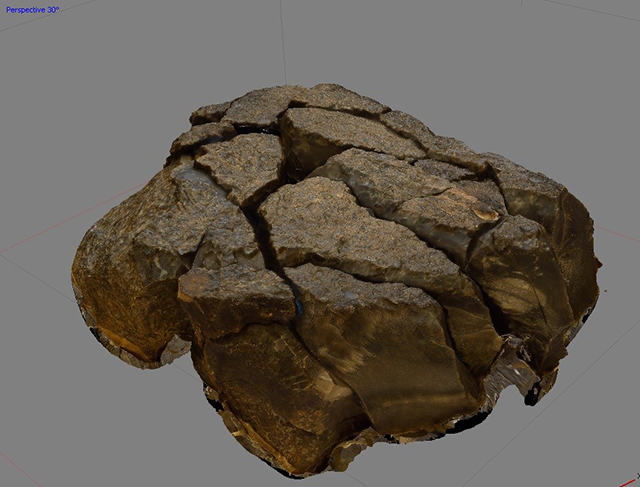 A 3D model of one of the refitted flint artefacts showing the original shape of the object and its different surfaces.

When they were excavated each artefact was in dozens of pieces and refitting them was challenging. However, having a completed photogrammetric model has allowed us to reconstruct the shape and, importantly, the surfaces of these objects which is highly important for interpreting and understanding their use. Trying to understand this from dozens of separated pieces or an unwieldy, temporarily-held-together artefact would be incredibly difficult and the resolutions supported by photogrammetry mean that detailed analysis is straightforward.

Photogrammetry has proven to be an indispensable tool for the project, from recording on-site to post-excavation analyses. Embedding the technique within the excavation process and using it to generate site plans, support the production of graphics and provide a visual archive of on-site archaeology and artefacts has given us a detailed overview to reinforce our understanding of the Must Farm pile-dwellings and the activities that took place there. Importantly, photogrammetry has aided our interpretation of key objects, materials and contexts and even relive moments of the excavation, long after they took place.