Post-Ex Diary 20: The Importance of Visualisation – Photography Part One

Recently, we’ve been discussing the value of different types of visualisation to the Must Farm project and how these can help with our work examining the site’s archaeology. We’ve described how important photogrammetry and illustration are, both during and after an excavation, and this month we’re focusing (no pun intended) on the role of photography.

Photography has been used in archaeology for well over a hundred years, playing a vital role in the depiction of sites, capturing the processes of excavation and recording all aspects of archaeological work. Archaeological photography is a complex and wide-ranging specialism that requires skill, experience and varied archaeological knowledge to document an excavation including its techniques, artefacts, stratigraphy.

Photographic technology is always developing (again, no pun intended) and archaeology is gradually embracing the benefits of digital formats, moving away from the days of taking photos using both colour and black and white film. While cameras are steadily receiving new or improved features and image resolutions increasing, archaeological photography requires much more than technical advancements to produce the images we need.

Images are critical to archaeological research and photographs are the ideal format to capture important moments in a project. These could be photos marking the first appearance of a bronze axe as it emerges from murky sediments or a record shot of a cleaned area of archaeology that highlights its most important aspects. They could be capturing the subtle details of wear to show how an artefact was used or extreme close-ups of textiles to demonstrate how they were made.

We were fortunate to have an experienced archaeological photographer at Must Farm, Dave Webb, who documented, and continues to document, the work of the project. In this month’s post-excavation diary we were keen to share some of his photos exploring the different elements of Must Farm captured by the camera’s lens.

Perhaps one of the most familiar elements of archaeological photography is their use in recording the different artefacts unearthed during an excavation. In these images it is essential to capture the important elements of an object and show the context surrounding the artefact’s deposition, discovery and removal.

During the excavations at the Must Farm pile-dwelling, we recorded and removed thousands of finds. Ensuring there were photographs that not only clearly showed the condition, character and position of the artefacts but also captured the sense of discovery and immediacy was very important.

The following images are some of our favourites, and the first to spring to mind when we thought about this aspect of archaeological photography. 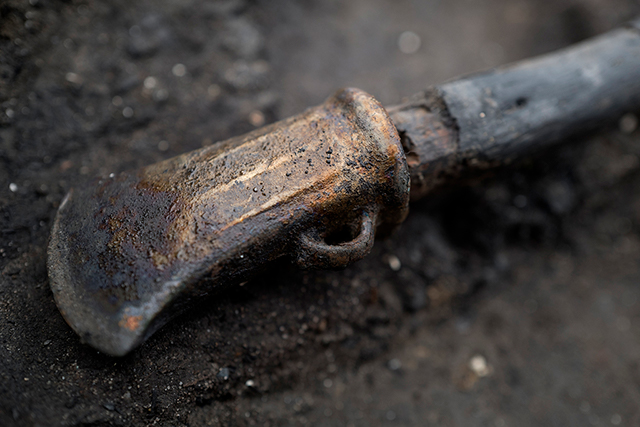 Burnt socketed axe head with charred haft in the background.

This find was one of the team’s most exciting discoveries during the excavation. It was a very delicate process to remove the surrounding sediment from the artefact and the image captures the moment the axe was exposed in situ. The texture of the bronze’s surface is beautifully captured and signs of wear around the edge of the blade can just be seen. 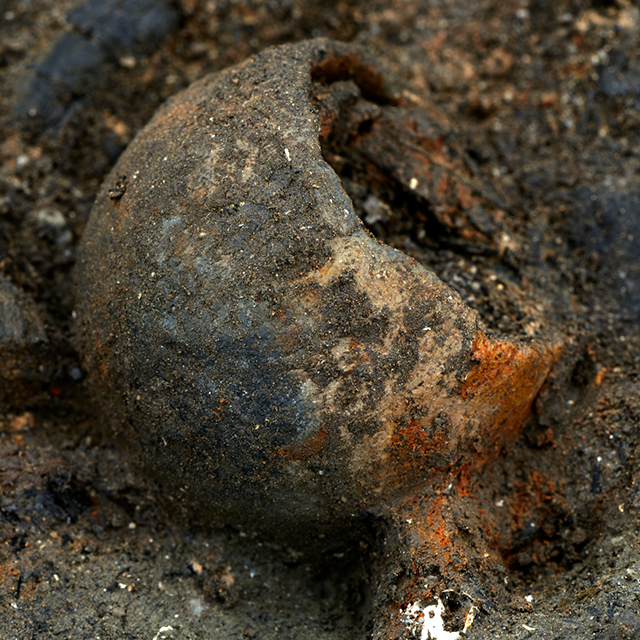 One of the smallest pots found at Must Farm as it began to emerge from the sediment.

This photograph records the moment one of the most fragile artefacts was first discovered at the pile-dwelling. The image shows the effect the fire had on the tiny pot, creating a clear pattern on the surface of the clay with its lower left a blue-black colour and its upper right very pale brown. The background of the image also shows the varied texture of the sediments. Minute, flecks of bright white, broken shell fragments from the river channel and larger, black chunks of burnt debris from the fire that destroyed the pile-dwellings are present throughout these sediments. 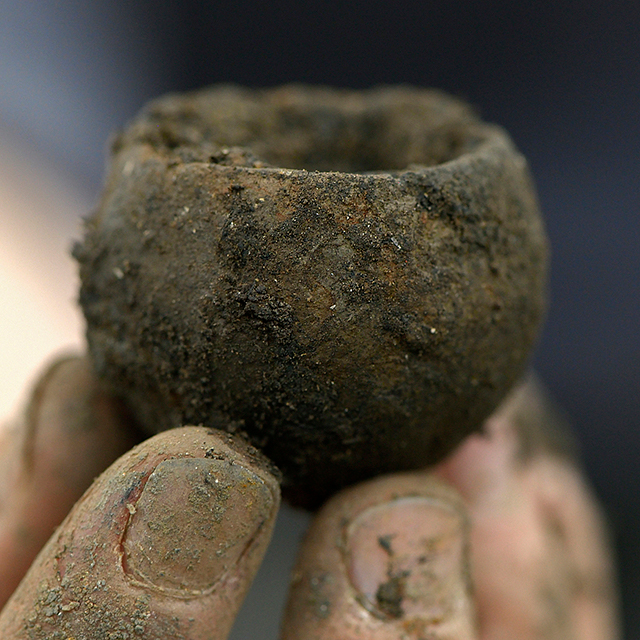 The same, small vessel moments after it was removed from the ground.

We are occasionally asked what some of our favourite moments from the excavation were and this photograph captures one of them. The image really shows the scale of this tiny pot, carefully held in one of the team’s muddy fingers just after it was excavated. The photograph captures how thin the walls of the vessel are but also how uniformly shaped the pot is. All the pottery from the Must Farm pile-dwelling settlement is fascinating, from the large coarseware vessels to the fineware bowls, but these delicate miniature “cups” are beautiful. 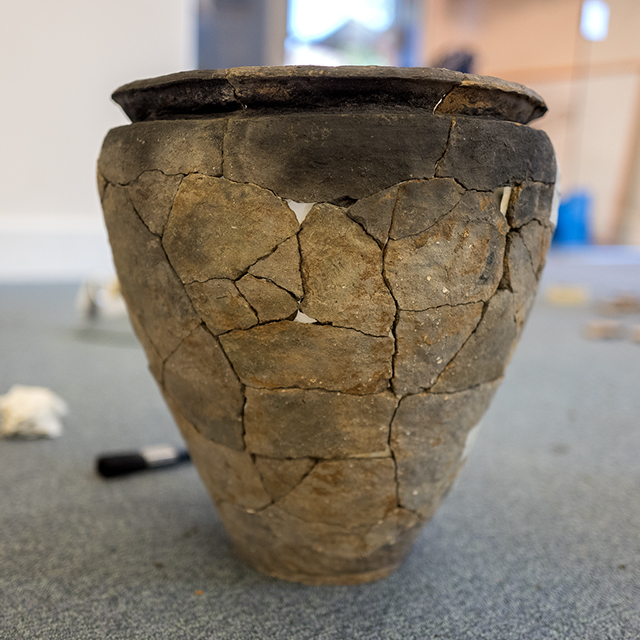 A large coarseware vessel refitted from broken sherds during post-excavation.

Archaeological photographs are not limited to excavations and this photograph records the moment dozens of broken sherds were reunited to rebuild an artefact that had been broken for 3,000 years. Many of the larger pots from the pile-dwelling were broken during the demise of the settlement, leaving us with thousands of fragments. Refitting them allows us to understand the histories of individual vessels and photographs are essential reference materials, particularly when the pots must be broken back down for further research. This image shows the discolouration between the main body of the pot and the upper rim caused by the fire, the style and angle of the vessel’s neck and the pattern of breakages on this side.

Alongside the illustrative images of artefacts, typically taken during excavations, are more formal record shots. These images, often used in publications, are centred around the artefacts. Record photographs are designed to clearly show the object to the viewer, immediately giving them an understanding of the artefact. This includes demonstrating the size of the object with the use of a clear scale and the careful use of lighting to emphasise important elements of an artefact.

Using photographs to highlight and focus on specific characteristics of artefacts is an essential component of archaeological photography. Picking out subtle details of finds is necessary for specialists, who often use these identifiers to help gain a better understanding of an object. Close-ups of notches in swords, areas of damage on tools or clear images of unusual markings and grooves on wooden artefacts can all help archaeologists in their interpretation of an object.

Many of the objects from the Must Farm pile-dwelling are particularly delicate and require lengthy conservation to protect them from decay. Having a range of detailed record photographs of artefacts, especially the more fragile material, enables the team to continue our research without waiting to see some of the objects first-hand again.

We’ve chosen a few of our favourite record photographs that show how valuable these images are to the archive and in assisting our post-excavation work. 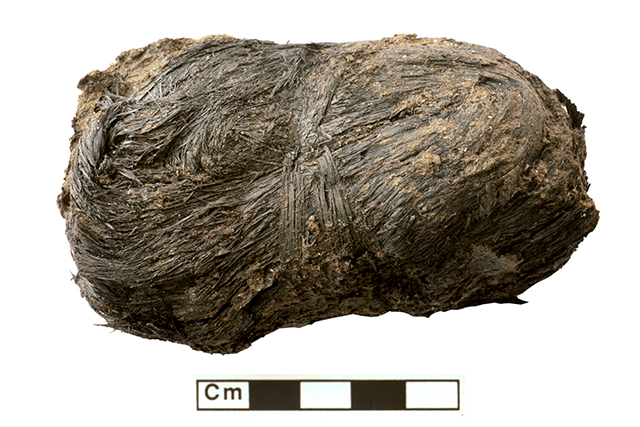 A “fibre bundle” from the Must Farm pile-dwelling.

In Part Six of our video series on the textiles from Must Farm, Dr Susanna Harris discussed these fascinating “fibre bundles” in more detail. This photograph, taken before the textiles began a long and delicate conservation process, shows one of these bundles and the astonishing condition the plant fibres are in after 3,000 years. The image shows how the fibres have been gathered together and then more fibres tied around the centre to keep the bundle together. 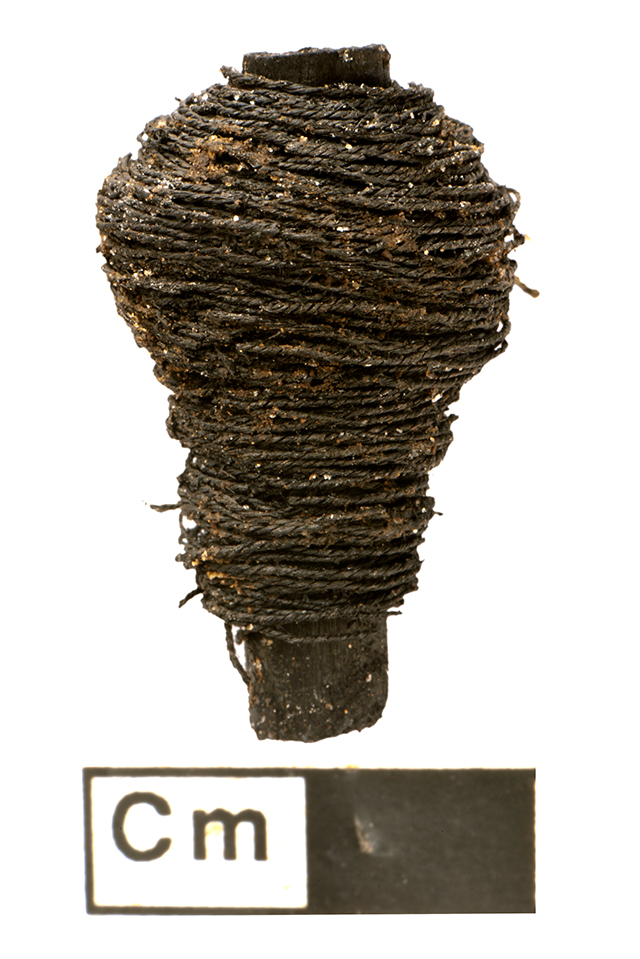 A “bobbin” of thread from the Must Farm pile-dwelling.

This record photograph shows one of the “bobbins” from the site, made from plant fibres, shortly after it was excavated and carefully cleaned. These objects are incredibly fragile and survived owing to the mixture of charring from the fire and the wet, waterlogged conditions of the river channel it fell into. The image shows the scale of the artefact, with the stick the thread is wrapped around less than half-a-centimetre in width. Similarly, the thread itself is extremely fine and the photograph captures the fragility of this Late Bronze Age object. 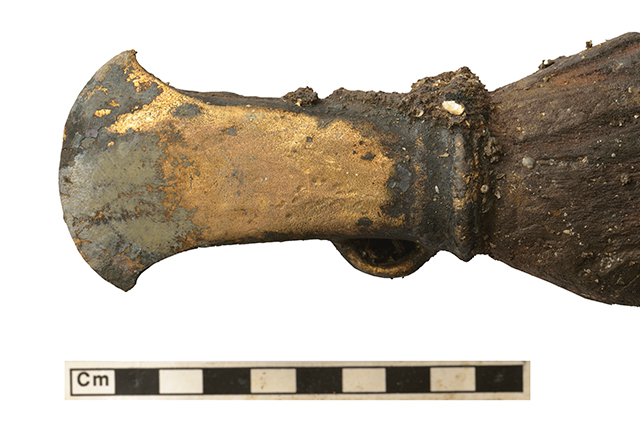 Close-up record photograph of a hafted socketed axe from Must Farm.

The ability of close-up photography to show different elements of an artefact, both from during its life to after its deposition, makes the technique very powerful. This image shows the evidence of use on the edge of the axe’s blade alongside other subtle marks on its sides. The photograph also captures the impact of the axe’s surroundings once it came to rest at the bottom of the river channel. On the right of the image, small sharp fragments of shell have become embedded within the soft wood of the haft and the axe itself has corrosion adhered to the top of the head.

In our next blog we continue to discuss the importance of archaeological photography by examining the role of working shots, site record shots and some of the people of the Must Farm project.