Since the very first evaluations at the site of the current Must Farm project, large structural timbers have always been discovered. However, until recently, it was never clear exactly what structure, or structures, that these timbers belonged to. The excavation has always been referred to as the “timber platform”, suggesting the presence of a single wooden, raised area but now we are fairly certain this is not the case. As we finished exposing and cleaning the burnt wooden debris in our first two areas, it became clear we had a circular building that strongly resembled a round house. 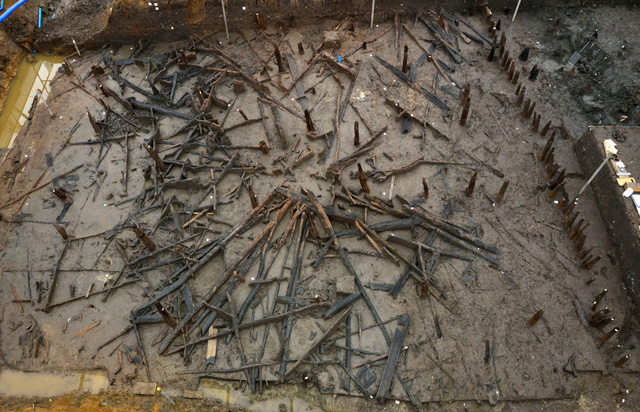 Overhead view of the round house and surrounding wood mass

Circular buildings from the Bronze Age are not uncommon and are dug relatively frequently in both commercial and research contexts. However, when these dwellings are found they are invariably a series of postholes on dry land rather than posts rising out of a former river. There are some fairly well preserved Bronze Age houses in Britain, commonly found in upland landscapes such as Dartmoor, where the walls are constructed from stone and survive. However, in both examples there is usually little, if any, evidence of the actual structure or its interior: roofs, fittings, furniture, flooring and so on. What is so incredible and exciting is that at Must Farm we have a well-preserved, lowland late Bronze Age round house that could well include all of the above.

So, how have we identified this circular series of posts as a round house? Thanks to the methodology we have been using, we have been able to expose a large area of the wood mass and the uprights at the same time. As we removed the overlying sediments and cleaned the wood it became clear we had two circles of posts: a smaller, interior ring and a larger outer one. The posts in each ring are incredibly uniform: all are made of oak and have very similar diameters. These are very consistent with the form of a traditional Bronze Age round house usually identified in lowland areas, on dry land, by postholes. 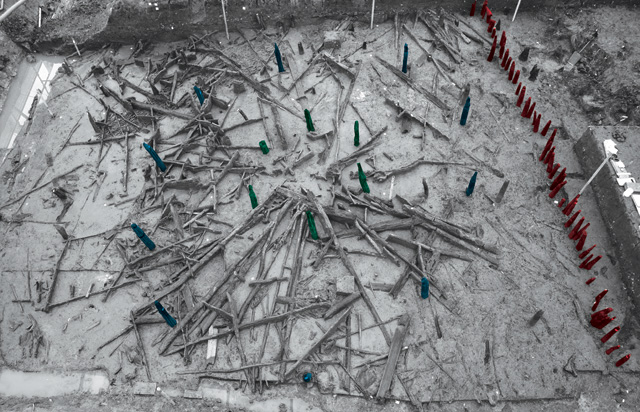 What is truly exciting is the presence not just of these well-preserved timber uprights but the survival of other structural elements. There are sections of what appear to be intact walls and, most extraordinarily, portions of the roof. This is a hugely important discovery as this will be one of the first later Bronze Age roofs to be excavated and analysed using modern archaeological techniques. It even appears that portions of the roof have retained their original position as the building collapsed. The radial pieces of wood emanating from the centre of the post circles, like the spokes of a wheel, are these roof timbers. 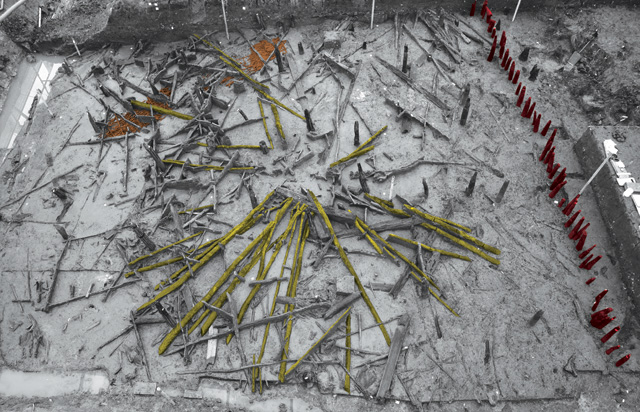 Already we have begun to understand this dwelling better, simply from examining the roof timbers and uprights. The diameter of the building is consistent with those found on dry land in this area of the country. This is particularly interesting as some have suggested, based on the material culture present, that any structure at the site would be far more significant than a “normal” later Bronze Age home. However, the dimensions of the building seem extremely comparable to other settlements in the surrounding area. The main difference is the Must Farm round house has been built on stilts to raise it above a distinctly wet environment, over a river, whereas most other settlements are constructed on dry ground. Does this make the site “special” or could it be a consequence of fewer excavations taking place at this depth, in this type of environment?

The bases of the roof timbers which fan out from the centre of the structure have distinct bevels on. Looking at the degree of these bevels suggests that the pitch of the roof was in the region of 30 degrees. In the sediment there are traces of clumps of burnt thatch starting to emerge in the silts, which will be exposed when we excavate more of the building. The presence of thatch suggests the roof was made from reeds and we have even found small fastenings that would likely have attached this material. This level of detail is something that most archaeologists would never expect to find when excavating a house of this period.

Around the edges of the outer ring of posts are several sections of wattle panel. These remarkably well-preserved panels seem to have been the outer walls of the building. When the house burnt down, not all of the wood was destroyed completely. It is possible that when the fire began to become more intense the wattle sections broke off and fell into their current positions around the outside of the structure. Even though we are still at the early stages of exploring the house we are already able to reconstruct elements, not only of the building, but also its demise. 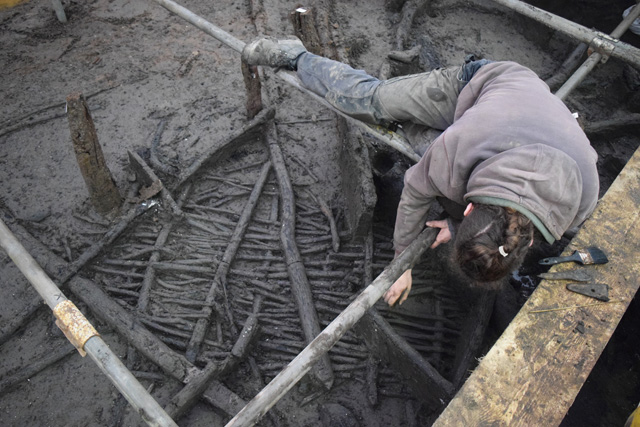 We’ve been referring to the building as a round house. However, what we really have here at Must Farm is a home. Not simply the wooden structure itself but everything associated with it. One of the key aims of the project was always to try and understand life at the site during the later Bronze Age. With the remains of this round house, in this condition, there is a wealth of possibilities of what we will be able to uncover.

As we get into the occupation deposits, below the roof, we are hoping to be able to understand how the home was not only arranged, but used. There have been many suggestions on the spatial organisation and function of different areas inside prehistoric houses. With the condition of our structure there is a very real possibility we can directly test these theories, especially as any associated material is likely to be deposited very close to where it was originally kept and used. The area surrounding the house is also going to be very interesting. Will there be a wide arc where broken objects and waste material was unceremoniously dumped? Or could there be more of a pattern to the “rubbish” from the settlement? 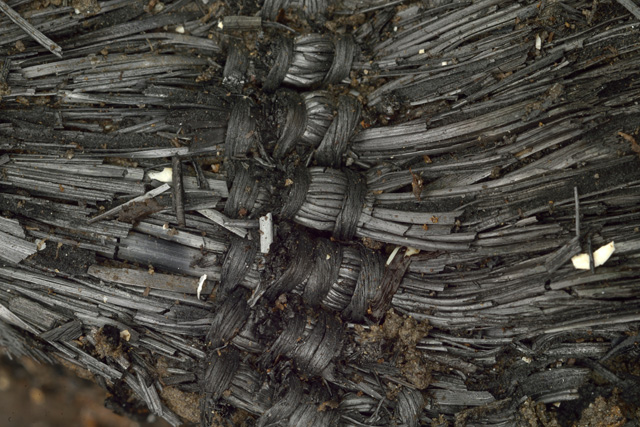 Perhaps even more exciting is what material and evidence we could have preserved that is not only rare, but rarely considered. There is a strong likelihood we will have surviving sections of original floor; a structural feature seldom understood in raised round houses. Given the survival of very fine textiles in higher-up contexts it is highly probable we will have more present in the lower occupation deposits. These textiles could well be aspects of a home usually only guessed at: rugs, matting, drapes and potentially even decorative pieces.

Having such a complete, contextualised later Bronze Age home is a phenomenally rare discovery, especially in the United Kingdom. Being able to excavate and study elements ranging from structural sections of roof to the objects of everyday life is an opportunity prehistorians long for. At the beginning of this excavation, uncovering such a detailed, comprehensive and wide-ranging insight into the lives of the people from this settlement was a best-case scenario. Amazingly, this exact scenario was precisely what we discovered. Over the remaining months of the project we will be working with a large team of specialists to ensure this incredible archaeology is understood and expertly recorded. Through a combination of excavation and scientific analyses we are hoping to gain an unprecedented appreciation for life in Bronze Age Britain. 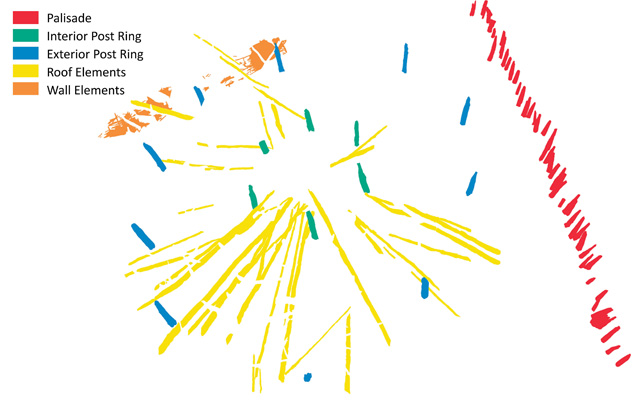