Uncovering Material from the Structures

Last week we described our strategy for excavating the round houses, primarily focusing on how we are dealing with the roof timbers. We’ve just finished recording the timbers across the entirety of the first quadrant of the house in the western portion of the site. This has been a complex, detailed process and has revealed a large number of worked, structural timbers. We have already recorded over a thousand pieces of wood since the excavation began, a fraction of the total number.

These timbers have been recorded and removed from the quadrant. This allows us to begin the exciting process of working on the “occupation” deposits that lie underneath the roofing material of the house. In one of our early site diaries we discussed the separation of layers created by the destruction of the structures. The heavier artefacts that would have originally been inside the stilt houses would have instantly sank to the base of the river channel below. Contrastingly, the more buoyant wood and thatch from the building would have floated for a time before eventually sinking and lying on top of this occupation horizon. 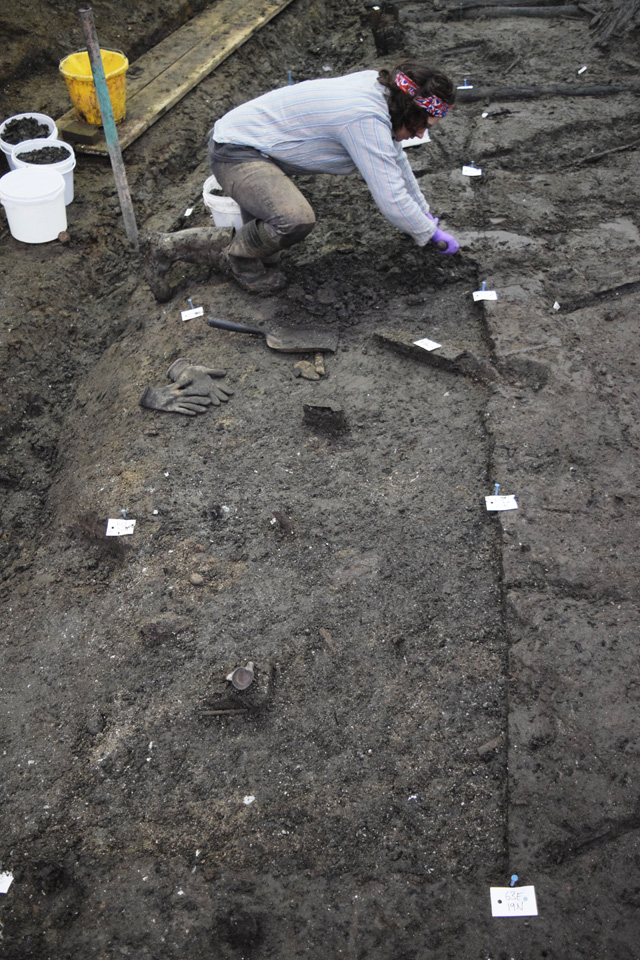 Excavating the occupation deposit that sits underneath the wood mass

Archaeologically, this is proving very beneficial as we can fairly easily separate these two different deposits and excavate them independently. Once the wood is removed we had to create another strategy that would maximise the information that could be gained from this very rich, important layer. Alongside all the objects from within the buildings we knew this deposit would also contain valuable environmental data on the conditions within the houses when they were occupied. So, whatever methodology we used would have to be able to incorporate this potential treasure trove of data.

We decided to divide up each quadrant of the building into a grid, consisting of 1m by 1m squares. Within this grid a strategy was created that would ensure both the interior and exterior of the house was sampled for environmental data. This is particularly important to establish if there are significant differences between areas. In the squares we are sampling we are collecting 50 litres of sediment plus an additional smaller sample to allow for a wide variety of investigative techniques to be used.

We also expect that this occupation deposit will contain fairly large quantities of artefacts related to the dwellings’ use. Many of them will be large enough to identify visually: complete pots, quern-stones and so on. However, some will be fragmentary or especially small; yet they are still crucial elements of the assemblage. Objects such as beads are not only beautiful but relatively rare in later Bronze Age assemblages. Making sure we have recovered as many as possible is important in understanding their likely numbers as part of a domestic assemblage.

Equally, pottery fragments can also be very useful: not only in terms of the assemblage but also in potentially revealing more information about the fire at the settlement. Pottery spalls are small pieces of pottery created as a result of the firing process. They form when a vessel is heated to a very high temperature and gas within the fabric of the vessel causes small explosions, separating pieces from the pot. These are commonly seen during the original firing process but can also be created when a pot is re-fired.

We know that the heat from the fire within the settlement was hot enough to vitrify (turn into glass) the food within the pots. At these temperatures it is also enough to cause the pots to be re-fired, leading to spalling. Some of the samples we have processed contain very large amounts of spalling, suggesting that there were either lots of pots in the vicinity or the vessels were closer to the heat and spalled more. This shows that even the tiniest, incomplete elements of artefacts can be used to glean information about the site and the process of its demise. 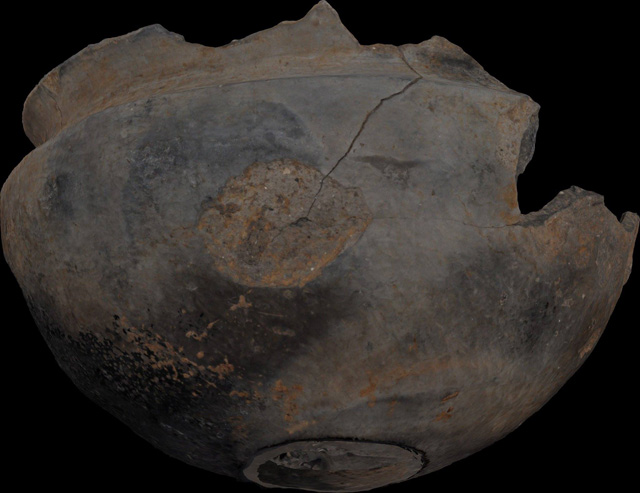 3D model of one of the vessels found in 2006. Its side has clear evidence of spalling

In order to recover these very small pieces of the puzzle we are wet sieving all of the sediment that we remove. We do this by excavating each 1m by 1m square independently and collecting all the silt that is removed doing so. The sediment is then passed carefully through a 4mm mesh using water. The residues that are left are dried and then sorted by hand to recover anything archaeological, from beads to small animal bones. In combination with the more detailed, fine-grained environmental analysis this should lead to us gathering a large amount of data that we can begin to unpick in post-excavation.

We are beginning our excavation of the occupation deposit towards the edge of the first building and slowly working towards its interior. It means we are having a relatively slow start and only small amounts of material are currently emerging. However, this strategy is useful as it allows us to assess the depth and character of the deposits we are uncovering before we encounter much larger densities of artefacts. As with most aspects of archaeology, it is a fairly slow and intricate process requiring a methodical approach while keeping a careful look out for anything unusual. 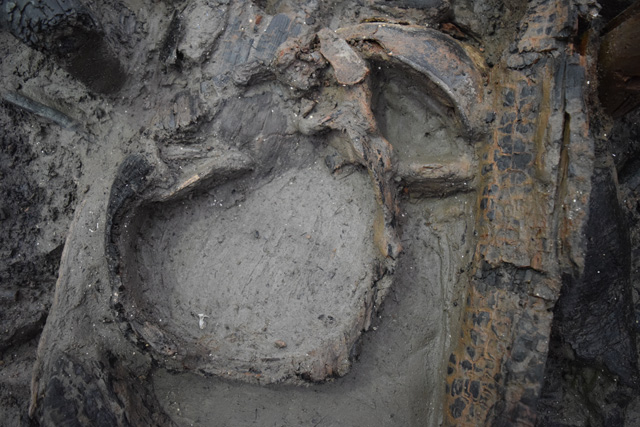 A wooden bowl or bucket base with fine pottery alongside it. All artefacts are from within the occupation deposit

As many of the artefacts we could be encountering are fragile or sensitive, such as textiles, thatch and organic residues, we have to be very aware of the sediment conditions and any subtle changes in the silt colour or texture. Alongside these we are expecting fairly large amounts of pottery and animal bone, including antler, which are often the core materials in a domestic assemblage. There is also the potential for more uncommon household objects including tools, cutlery and even furniture.

With so much potential in this occupation deposit, we’re very excited. Although this isn’t the only current focus of the project: we still need to continue exposing and recording the upper wood mass layer in the remaining areas of site. Over the next few weeks, we’ll keep you updated on each aspect of the project and bring you regular images from across each area.