Exposing the Site and “Verticality”

In the last entry, we explained a little about the formation of the site as we encountered it. From evaluations we knew there were remnants of a Later Bronze Age settlement, situated on a platform, that had experienced an intense fire before collapsing into the river it was built upon. Once this had happened, the natural river silts began to accumulate burying the material under a thick layer. It is this layer that we are currently removing in order to get closer to the really exciting remains of the wooden platform.

The layer of river material that covers the settlement debris is virtually sterile and it is only very occasionally that we find small pieces of bone or fish scales. This suggests that when the platform burnt down all activity at this site ceased and it was abandoned. This absence of archaeology within this river layer means that we can remove it. We are really interested in the material-rich deposits that hold most of the key information. 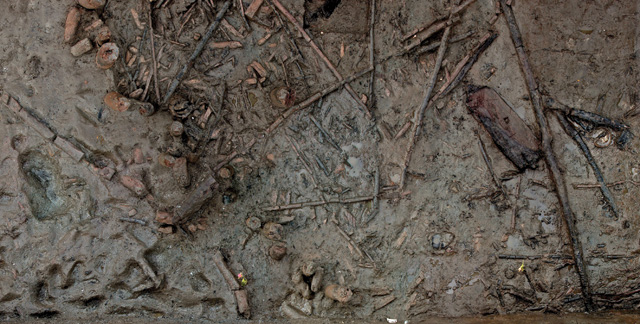 Despite the fact there are virtually no finds being deposited in these river layers we cannot simply machine them down in the same way as the upper sediments. The simple reason for this is the verticality of the archaeology present which created the settlement to begin with. The site is comprised of two key forms of upright: ash stakes that comprise the exterior palisade and larger oak posts which would have supported the main platform. Even though much of the site was badly damaged by the fire and descended to the base of the river, most of these vertical pieces of wood remained in place.

As the river silts were deposited they formed around these uprights which means we have to be particularly careful when digging down, as there is the potential for clipping the tops of these timbers. We have to cautiously and methodically work downwards in layers, keeping a careful eye out for any traces of timber appearing. Spotting wood can be fairly tricky as the very tops of the posts have often decayed slightly and are stained by silt, making it a subtle distinction to look for.

Once we discover a stake or post we mark it with a peg and continue the process, working across the different areas of the site. Given the scale of the project and the density of the archaeology, this is a time-consuming and intense process. We are starting to get a clearer picture of the site, both in terms of the palisade and the interior posts that would have supported the platform. 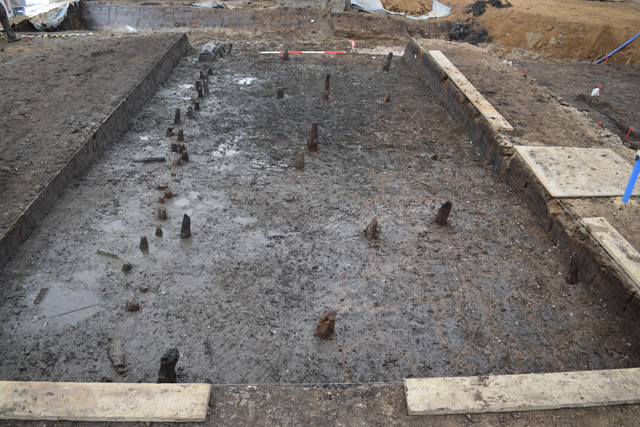 Wood is a very vulnerable archaeological material which is highly susceptible to damage and degradation. The waterlogged conditions at Must Farm have helped to preserve a large number of timbers in outstanding condition, an enormous bonus for us. However, as soon as we discover a post or stake, we must immediately take action to prevent it starting to degrade.

After locating the wood we carefully clean it to remove any silt or shell adhering to the surface. This is done with small wooden sculpting tools and sponges to avoid marking the timber. Cleaning up the wood in this manner allows us to inspect it for any tool marks and also to try and identify the species. Only a few species of wood can be identified visually and luckily these include oak and ash, both of which are found on site. 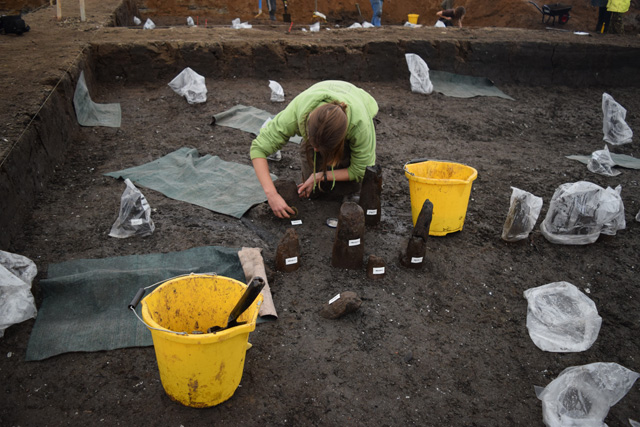 When we have examined the stakes and posts it is essential to keep them damp and waterlogged. We do this by routinely soaking them with a water sprayer and carefully wrapping them in either plastic or a moisture-retaining material. At the moment we are only seeing the tip of the iceberg, quite literally as the wood we have exposed is only the very top of these stakes and posts. As we begin to excavate the richer material deposits beneath the river silts more of these timbers will be exposed. It is very much an ongoing process but one that is essential to gain the best understanding of the site as a whole entity.