Dig Diary 30: Our Houses: What We Know and What We Don’t – Part Three

This site diary is the third in a series that is exploring our current theories, and questions, about the construction of the homes at Must Farm. Please see the previous entries for a general introduction, a breakdown of the buildings’ ground plans, rooves and walls.

One of the most common questions we are asked is how the rooves of the structures would have been constructed. When we first uncovered the wood mass from roundhouse one, it became clear that we had a good quantity of timber from the roof still preserved. In fact, much of this timber still seemed to have retained its “fan” shape as it came to rest at the bottom of the river channel. After several weeks of analysis, we are beginning to get a clearer picture of the roof and its construction. However, we still have a number of questions to try and answer.

The roof seems to have been comprised of rafters that joined in an apex over the centre of the building. The ends of the timbers would have likely extended over the walls of the building creating a small area of eaves that would have protruded over the river. The roof would have rested on a ring of large, split timbers that extended around the top of the wall supported by timber uprights. One of the most interesting elements of the roof is that none of the timbers have signs of joinery on, unlike the wall plates and other elements. 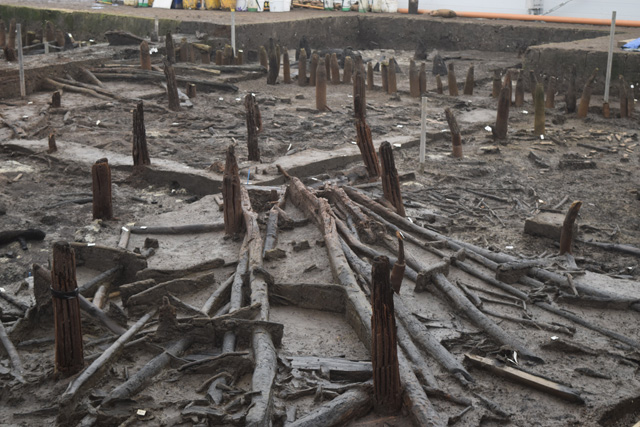 Quadrant of roundhouse one with the roof still to be excavated. The “fan” shape of the rafters has remained as they sank to the bottom of the river.

The wall plates all have sizable mortise joinery, whereas the rafters have none. Does this mean the roof elements were all tied and lashed together to provide support? We have excellently preserved roof timbers, so it is unlikely the lack of joints is a consequence of poor preservation. However, we have a lack of binding materials so far. Could the ties have burnt away? Many rooves have purlins, narrow horizontal beams that span between the rafters to help support the weight of the roofing material. Yet, we aren’t currently sure whether these structures had purlins. The frequency of rafters suggests that they were very closely spaced, perhaps eliminating the need for purlins.

At the beginning of the project we were unsure of what material would have been used to roof the structure. Initially, given the location of the site in the Fens, we wondered if local reeds would have been used as a type of thatch. However, upon exploring the deposits below the building, we have evidence for a very different roofing material. It seems that turf was used to roof the homes owing to the large quantities of burnt turf deposited at the base of the channel. Especially fascinating is that the turf often contains charred cereal roots which suggests that the turf being used was cut from areas where crops had been cultivated. 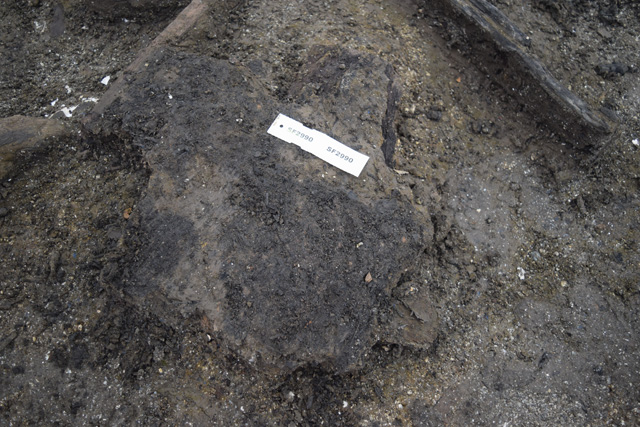 Burnt clump of turf-like material. The quantities we are finding this material in suggest a turf roof rather than a reed thatch.

The weight of a turf roof that spanned a building of roughly eight metres in diameter would no doubt have been very substantial. Clearly, the strength of the stilts that supported the structure was very carefully engineered and demonstrates an excellent grasp of technology by the people who constructed the settlement. Once again, we are finding evidence that these were carefully built and planned houses rather than a group who were desperately struggling to survive in hastily thrown-together structures.

One of the biggest mysteries of the project, so far, has been the presence of strange areas of mostly unburnt clay. The clay is deposited in a very non-uniform way over fairly wide areas although it does largely seem to be clustered around the central ring of posts. We’ve had a wide range of suggestions of what this clay might have been for: from unused raw materials for pot making to a form of simple food preservation.

Perhaps the most often repeated theory is that this material could have come from a hearth. Evidence from prehistory shows that roundhouses usually had a hearth in their centre and it would be logical that the clay we are finding could constitute the basis for one. However, we aren’t sure as the more we investigate the clay, the more problematic a hearth interpretation becomes. 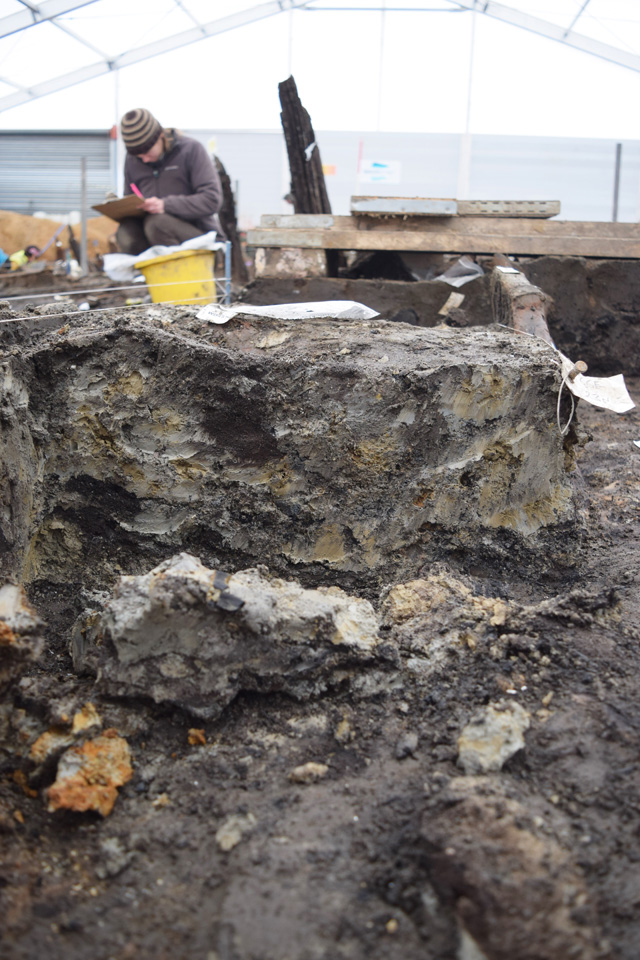 Image showing the unburnt clay. This is rather diffuse and mixed with burnt roof material.

The clay is largely unburnt, which seems odd for a hearth. In other examples, such as Glastonbury Lake Village, the clay hearths from those structures were solid, burnt lumps of clay rather than the much more diffuse spreads we have on site. Even if these hearths were relatively new, there should be distinct burnt sections of clay which we haven’t found anywhere on site as yet. Equally, within the clay there are small pockets of slightly charred turf roofing material. Beneath the clay we often find small, charred pieces of roundwood similar to the willow-like bundles. This suggests the original position of the clay was above the floor, not directly on it.

It is this presence of burnt turf and small, charred pieces of potential floor material underneath the clay that started leading us towards a theory that it could have actually been somewhere in the roof of the structure. This initially seemed like a very strange idea, as the quantity of clay from each structure would likely have weighed in the region of a tonne. However, if the building was strong enough to support a turf roof weighing vastly in excess of that, then it doesn’t seem too unreasonable to start considering the possibility the clay originally came from somewhere close to the apex of the roof. 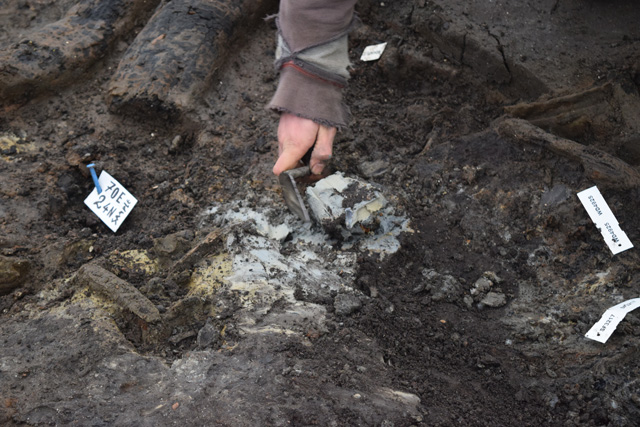 The unburnt clay is often found in smaller, isolated patches. This leads us to question the idea of it belonging to a central hearth. However, we are not ruling out this possibility and are geochemically sampling it.

After consulting with some of our specialists, the unburnt nature of the clay and its pockets of charred contents has led to an interesting theory developing. We are now beginning to consider that the clay was placed around the rafters at the apex of the roof. The rafter timbers all seem largely unburnt around the sections that would have rested at the apex, whereas the eave ends are all much more heavily charred. Could it be that the clay was being used in some function around the apex, which shielded these ends of the rafters from the fire?

Perhaps the apex of the building had some form of chimney or outlet for smoke and the clay played a role in its construction. When the building burnt and began to collapse, the clay fell into the channel below catching and trapping some of the burnt structural material before coming to rest on the floor of the river. This would explain why it is distributed over a fairly wide area and is not as burnt as hearth material.

This three-part series has been designed to communicate our current theories on the construction of the homes at the Must Farm settlement. This is very much a work-in-progress and will be refined and developed over the course of the next few months on-site and in post-excavation. We’ll do our best to post fresh updates detailing the fine-tuning and improvements we make to the theories and the evidence behind these changes. With the most complete body of evidence for a Bronze Age settlement and the construction of its homes, we hope to be able to provide an unprecedented insight into a typical house of this period.