As archaeologists, we are always trying to understand as much as possible about the daily lives of people living in the past. In prehistory this is often challenging, given the lack of any written evidence to help shed light onto everyday activities, particularly diet and food preparation. It is common to find some evidence of cooking and eating at archaeological sites. Indeed, arguably the two most routinely encountered finds on any excavation are pot sherds and animal bones: direct evidence of cooking. However, these materials are usually broken and widely dispersed making it difficult to get a clearer understanding of any routines or patterns related to butchery or preparation.

At the Must Farm settlement there are some very interesting patterns beginning to emerge in the distribution of the animal bone. In an earlier site diary, we noted that we were beginning to encounter some differences between animal remains inside and outside the roundhouses. This trend has continued in other roundhouses on site and is proving to be absolutely fascinating. Not only are there differences between the species of animals inside and outside the buildings, but the bones often differ in condition.

Animal Bone Inside Our Roundhouses

The animal remains found underneath the footprints of the stilted houses are associated with the buildings’ destruction. They are found alongside other burnt material and were probably inside the structures when they collapsed into the river beneath the homes. Overwhelmingly, these animal bones are domestic and dryland in character, dominated by semi-articulated young sheep and calf remains. This trend would not be unusual in a more typical, Late Bronze Age situated on the dryland but here in the watery environment of Must Farm, it is particularly interesting. 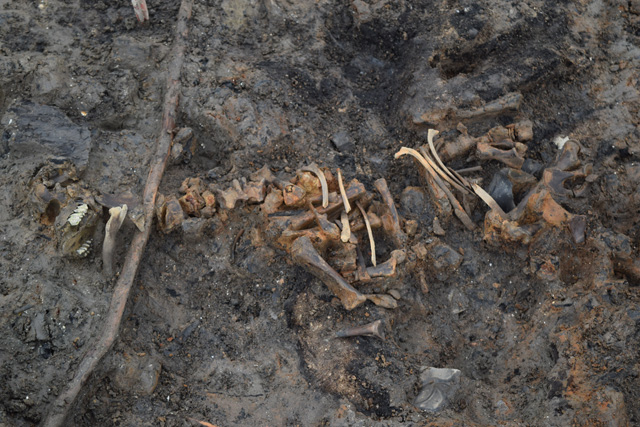 Image of a semi-articulated calf skeleton from one of our roundhouses. Domesticated animals tend to be found underneath the footprints of the stilted buildings.

At the nearby sites of King’s Dyke and Bradley Fen, which are broadly similar in date (Middle Bronze Age to Early Iron Age), young lamb remains are commonly found inside, or in the entrance to, roundhouses. In fact, it is very rare to find roundhouses of this period at dryland settlements that do not have young sheep remains inside. The dryland positioning of these sites mean their preservation is typically worse and it is not possible to see any material that may have originally been deposited around the outside of the structures there. Once again, the Must Farm site is sharing some characteristics with settlements that exist in very different environments.

Animal Bone Outside Our Roundhouses

The difference between the animal bone deposited inside and outside of the roundhouses at Must Farm is striking. The faunal remains outside the structures largely consists of wild animals, including wild boar and deer. While there does seem to be a notable lack of fish bone being consumed during the occupation, there are occasional pike remains found outside the structures. These wild animal remains are not found articulated and are instead dispersed and butchered. This is a remarkable difference between the domestic, semi-articulate animal bone recovered from underneath the structures. 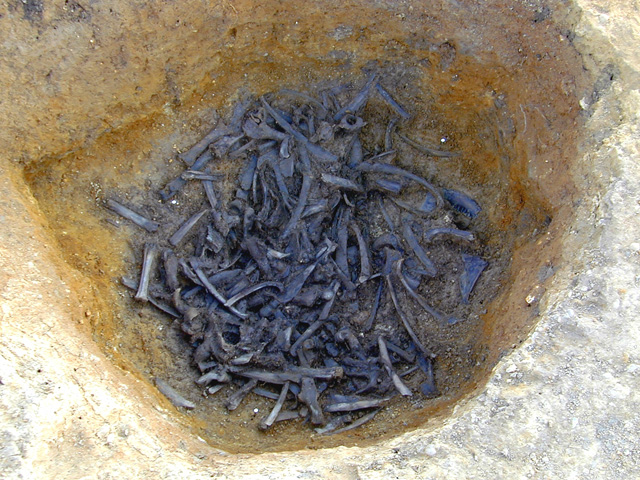 How does this material compare to animal bone deposited away from structures in dryland contexts? At Bradley Fen, a settlement with a much lengthier occupation, there is evidence of long-term cattle rearing. In disused, large watering holes there are often clusters of animal bone, particularly cattle that all seem to have been butchered in a single episode. At this site, in only three watering holes there were the remains of 17 cows, which would have produced at least 4220KG of meat. This evidence suggests that a single watering hole filled with remains might reflect a large consumption of food by a community. Having access to large numbers of animals also reflects an investment in farming over a period of time. 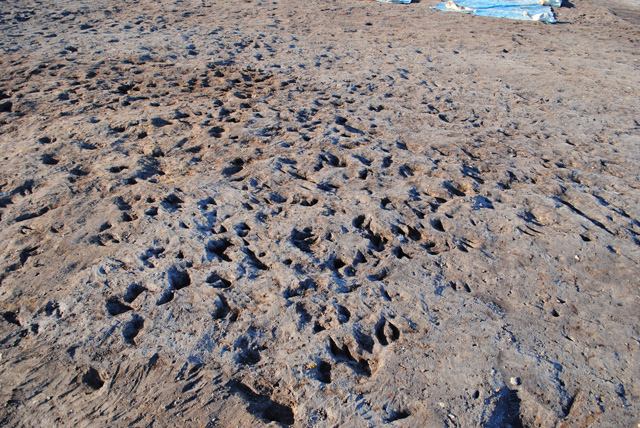 Image from Bradley Fen showing hundreds of cattle hoof prints, showing the numbers that were being moved around the landscape.

The evidence from the nearby, contemporary dryland settlements does have some differences to Must Farm. In a previous site diary, we went into more detail about how short the occupation of the settlement seemed to be. A lack of waste material alongside environmental and site formation data strongly suggest that people did not live at the Must Farm settlement for long before it burnt down. What is particularly interesting about this brief timespan is that it may well be reflected in the animal bone we are finding.

There is a much higher proportion of wild animal remains at Must Farm, concentrated around the outside of the buildings, than we had expected to find. Similarly, there seems to be a larger “wild” component to the diet at the settlement than comparable dryland settlements. As the Must Farm settlement seems to have been relatively recently built, could this larger proportion of wild animals in the diet be a result of them not having time to establish more long-term farming solutions? However, this could have been problematic in a wet environment, as many domestic animals struggle in these conditions with foot rot. 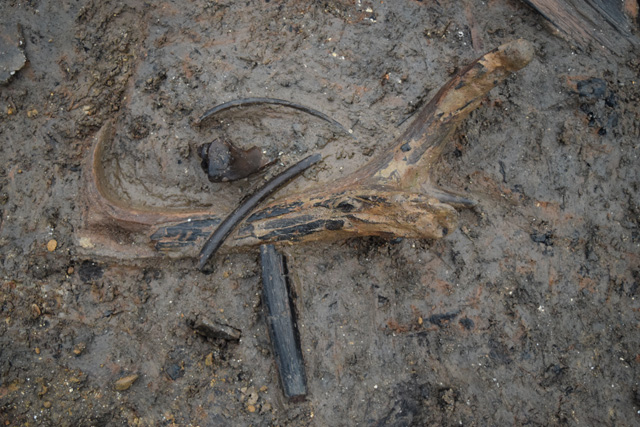 Image showing a deer antler just beginning to emerge from the outside of Roundhouse One. Disarticulated and butchered animal remains are focused around the edges of the stilted buildings.

Perhaps the presence of many wild animals, such as wild boar and deer could be a result of conscious selection. This difference may have been a cultural choice, during the Late Bronze Age were different types of meal eaten at different times of the year? Indeed, perhaps there was an abundance of wild resources close by around the time the settlement was created. As such it may have been easier to hunt these, almost as a type of “wild take-away” rather than focusing more on domestic animal staples.

There are still a great deal of questions remaining about the animal bone at the settlement. We are still at an early stage of examining the faunal remains and much more detail will emerge during the post-excavation analysis. However, the fact that these patterns are emerging around the distribution of these bones is very tantalising and gives us hope we’ll be able to get a greater understanding of this aspect of diet at Must Farm.

It is very important to remember that diet and food preparation is not entirely concerned with animal bone. Plant and vegetable remains would have also formed a significant element of prehistoric diet. However, it is much more difficult to detect this archaeologically owing to the differences in scale. Animal remains such as scapulae, skulls and long bones are very obvious whereas small grains and seeds are harder to notice. 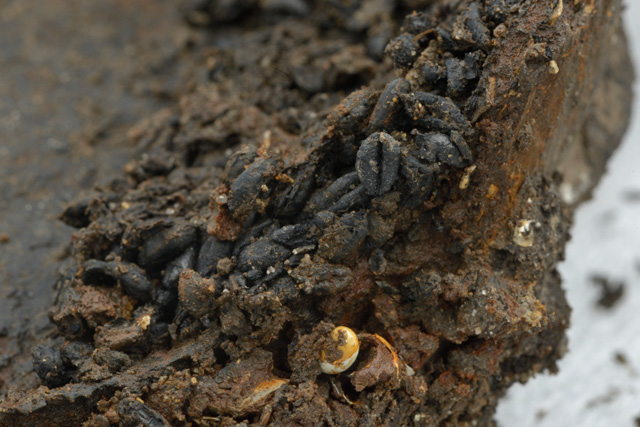 Image showing charred cereal grain adhered to the inside of a ceramic vessel.

Thankfully, we are being careful not to ignore this area of diet and are carrying out an extensive environmental sampling strategy to try and ensure as much plant material is recovered. We have already found some fascinating evidence such as charred cereal grains adhering to the inside of ceramic vessels. Yet, much more information will only emerge on the analysis of these samples which will hopefully give us more evidence into what plants would have been part of people’s diets.

The post-excavation process will be a lengthy one with so much to examine. We have food residues and crusts on the inside of many of our pots, which will undoubtedly be one of the most important ways at identifying direct evidence of diet. Similarly, scientific investigation of coprolites (preserved faeces) will also provide us with a better understanding of diet alongside health.

As we continue to excavate more material and take hundreds of environmental samples we are creating a very large body of evidence to examine. Using this material to explore the diets of the prehistoric people who lived at Must Farm is an essential aspect of the excavation. With such a well-preserved site, offering a very clear glimpse into a short-lived settlement from this period, we stand a very good chance of getting some fantastic results. Much of our understanding will be refined and developed through extensive post-excavation work. Having this opportunity to explore diet and, ultimately, to have an idea of the Must Farm “Menu” is a truly extraordinary aspect of this excavation.