Dig Diary 39: Exploring the Western Area of the Excavation

The Must Farm site is broken up into three main areas. The first is a central block which contained the majority of the archaeology, alongside two smaller areas to the east and west of the excavation. We described an overview of the site in greater detail in our two-part site diary, “A Tour of the Excavation” Part One and Part Two. As the archaeology in the central portion of the site was the best preserved, densest and most complex much of our work has focused on this area. However, we have continued to explore and record the east and west areas, discovering a wheel, more wattle panelling and a number of finds in the process.

As we near the completion of the central area, our attention has been turning to the east and west of the site. These areas have given us new challenges, more fantastic archaeology and plenty of questions to try and answer. It is amazing how different a distance of only a few metres can make to the condition, character and quantity of archaeology. Even though the east and west areas are smaller in size with less dense material they are still a very valuable element of the excavation and will help us to understand the character of the complete settlement.

The Western Area – Preservation and Palisade 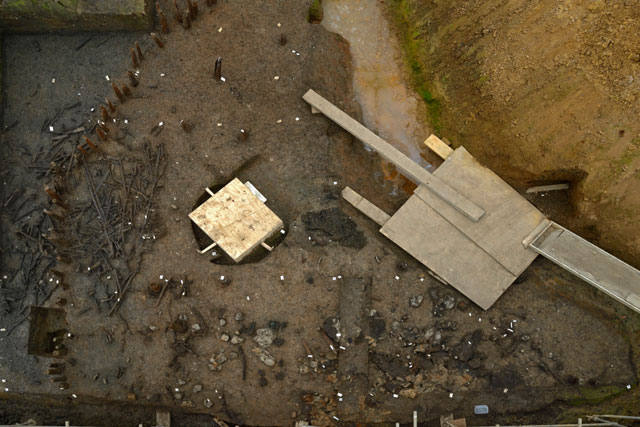 Recent image taken showing an overview of the Western Area of the excavation. The large wooden box contains the wheel discovered in February, while it is waiting to be removed.

One of the most immediate and striking aspects of the western area of the settlement is its condition. It is very clear that the preservation of material here is much poorer than elsewhere on site. The density of timber is much, much lower and the wood that has survived is generally material with charring. Visually there is a noticeable difference in the colour of the sediment in the western area when compared with the central and eastern zones of the excavation. To the west, the river silts have a distinct orange/reddish brown colour rather than the dark greyish-brown hue of the sediment in the central block.

The difference in colour is a direct reflection of the preservation conditions in the ground. This western area of the site sits incredibly close to the face of the edge of the quarry, which was open for some time historically in the 20th century. The proximity to the quarry edge has meant fluctuations in the water table which has had a definite impact on the archaeology. The water table has varied, meaning that the timber here has not been waterlogged at all times. This lack of water has resulted in oxygen reaching the wood, causing some of it to decay and the sediment to turn the distinct orangey colour. 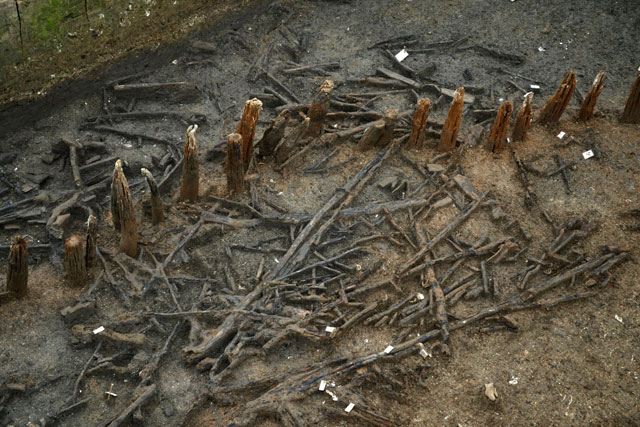 Image highlighting the colour difference between outside and inside the palisade. The outside is much darker and has better preserved timbers. The inside is a much lighter, orange-red colour which reflects poorer preservation conditions resulting from oxidisation.

However, despite the drop in preservation conditions in the western area from the rest of the archaeology at Must Farm, these conditions are still far better than British prehistorians could ever expect to encounter in an excavation. Equally, we have also been fortunate as a number of aspects of the archaeology have also helped some materials to survive when they would not normally have done so. Timber has survived in the western portion of the site despite these problems with the water table.

The fire which destroyed the buildings charred large amounts of timber across the excavation, a process which caused the wood to become carbonised. Carbonisation is a process that helps to turn the wood inorganic, helping to prevent its decay even when it is not waterlogged. Much of the surviving wood in the west has been preserved owing to its charring, including some really incredible finds such as the wheel we discovered in February.

A highly visible element of the western portion of the settlement is the remains of the palisade as it begins to slowly turn to the northwest. The tips of these posts display evidence of some decay, the wood is usually fairly soft and the upper 50cm of the uprights are normally split and cracked. However, the palisade has helped to act as a barrier and keep much of the archaeology surrounding it wet: even when the water table has dropped. These palisade posts have acted like straws: when the water table would have fallen below the level of the main wood mass, the porous upright posts would have sucked up water keeping themselves and the immediate area around them waterlogged. The role of the palisade in helping to keep parts of the site waterlogged can be seen clearly. The area inside the palisade is the orangey-brown colour representing poorer preservation. Outside the sediment is dark-grey and reflects better preservation where more wood mass survives. 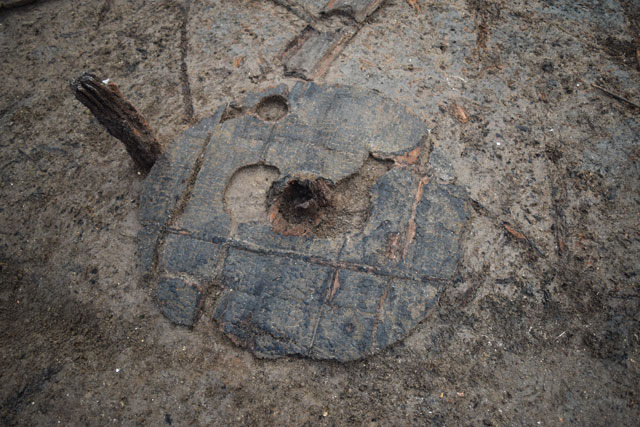 The wheel uncovered in February, which has survived largely thanks to the charring on its surface.

Such different preservation conditions have been challenging to work with, requiring careful and delicate excavation techniques to avoid damaging the surviving archaeology. The archaeology that has emerged is fascinating, both in terms of some spectacular finds and in providing an interesting comparison to the other areas of the settlement. One of the most striking discoveries was the wheel, which survived thanks to the charring of the wood. The artefact is still in the ground, having been stabilised by conservators, and will be lifted once more of the surrounding area has been cleared of archaeology.

The majority of the archaeology in the western area seems to be related to a structure: Roundhouse Three. There is much less timber relating to this building than our other structures. This lack of wood is a combination of the west’s preservation conditions and the presence of a drainage trench which has removed approximately half of the archaeology. Despite these problems, material relating to Roundhouse Three survives. We have discovered pottery, largely fragmented, alongside animal bone and some wooden artefacts that all seem to have been occupation material from this house. 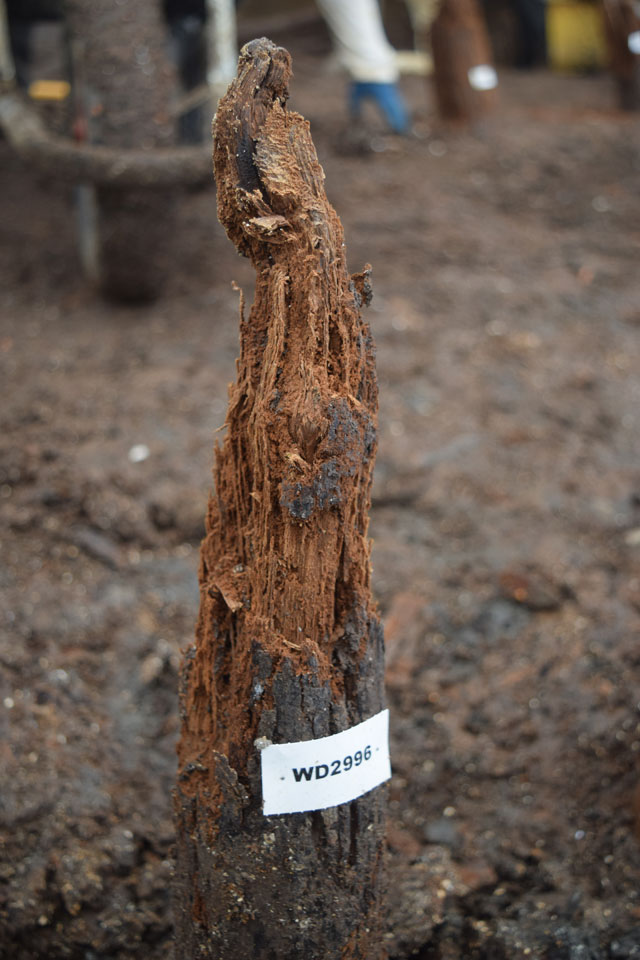 Image of a post tip showing some of the decay that has occurred in the area within the palisade to the west where the water table has fluctuated.

While much of the wood and more delicate organic materials, such as turf and thatch, might not have survived from Roundhouse Three we do have some structural evidence. Alongside the upright supports for the building there is also large amounts of the clay that we have found associated with all the structures in the settlement. As mentioned in a previous site diary, this clay seems to have been utilised as part of the roof of the structure, possibly around its apex.

Over the remaining few weeks of the project we’ll be recording and excavating the remaining timbers, removing the wheel ready for conservation and exploring a sample of the palisade posts here. We are already noticing some interesting similarities between the archaeology at the very edge of the settlement in this western area and the rest of the excavation, which we are keen to explore in more depth.