Placing Must Farm in context

The Must Farm timber platform is an exceptional site which requires lots of careful planning and coordination to excavate. Attention to detail is essential to ensure that this outstanding archaeology is dug and recorded as effectively as possible. However, as archaeologists we must try not to get overly focused on the process and minutiae of excavation and forget to ask the important questions. If we do there is a danger we can fail to place the site in context and, ultimately, lose sight of why we became archaeologists.

Evaluations at Must Farm in 2004 and 2006 highlighted a number of points to consider during our current excavation. We know that during the later Bronze Age, a settlement was constructed on wooden stilts over a river channel at the Must Farm site. The oak posts used to support the structure have been dated to between 1300 – 800BC using radiocarbon dating. Felling dates for the primary oak timbers, obtained through dendrochronology, suggest the site’s origins was as early as 1290 – 1250BC.

The Must Farm timber platform exists in a later Bronze Age landscape where large timber projects were being constructed. The first two rows of the nearby Flag Fen post alignment date to between 1300 – 1250BC: the same time as our site was being constructed. It is important to make these comparisons to remind us that our site is not an isolated example. It is just one small piece in a wider puzzle and seeing how the Must Farm site fits into prehistoric Fenland is just as essential as excavating pieces of bone and pottery. 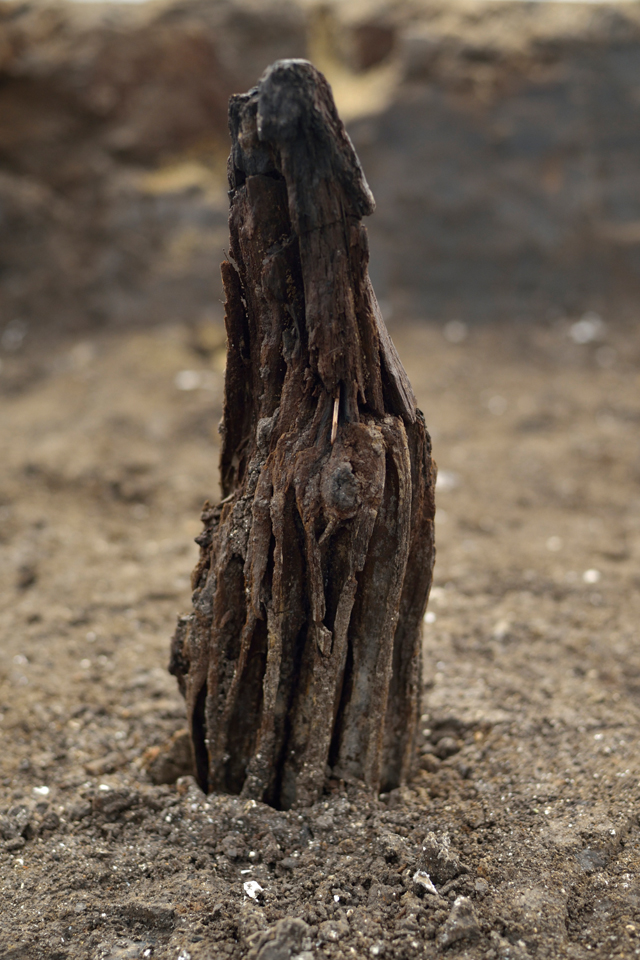 One of the questions we are keen to investigate is how the palisade relates to the main platform. What exactly is a palisade? A palisade is a continuous series of posts or stakes that form an enclosed area. Often words like “defence”, “barricade” or “stockade” are associated with it, implying some form of martial connotation, though this is not necessarily the case. Looking at the excavation and seeing the palisade posts and internal uprights together gives the distinct impression that the settlement would always have existed as an enclosed entity. However, the evaluations showed us this was not the case.

We know that the primary oak timbers that supported the settlement are Middle Bronze Age, most likely 1290 – 1250BC. Our dating evidence for the palisade places it between 1000 – 800BC, significantly later than the structural, internal timbers. We even have wood chips close to the palisade, giving us its exact construction level which happened much later than the creation of the settlement. The “platform”, in all of its manifestations, could have existed for 300 years unenclosed. Which raises the important question, why suddenly build an enclosure around your settlement? 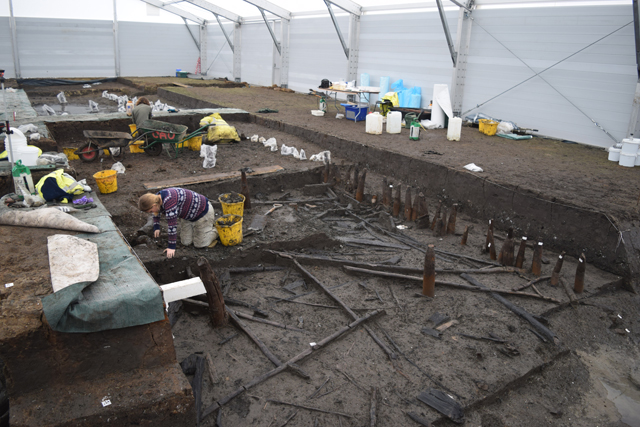 Even more interesting is the relationship between the palisade and the fire which ended the life of the timber platform. We find the wood chips associated with the creation of the palisade directly underneath the layer of burnt debris. This association suggests that the blaze that destroyed the settlement occurred shortly after the palisade was created. Could this simply be an unfortunate coincidence or was the palisade constructed to try and protect the settlement?

The later Bronze Age is a fascinating period to examine archaeologically. People are beginning to “colonise” new landscapes such as the Fens. The rivers and waterways in these locations are clearly very important both in terms of movement and trade. It is also something of a boom period for bronze artefacts, which are being produced in huge numbers. A large proportion of these objects are martial in nature; swords, spears and shields. Is this a reflection of society a whole? Or is something more complex happening?

Being able to work on such a rich site with a huge amount of depth to its archaeology allows us to think about a huge range of topics and issues. A lot of the time we are focused on smaller-scale, site-specific questions. Why was the palisade built? What was its function? How did the fire that destroyed the settlement start? However, we must always remember to think about the later Bronze Age on a wider level. How does Must Farm relate to other sites in the Fens during this period? Why are people moving into this Fenland landscape? Is the timber platform representative of other later Bronze Age settlements?

It is all these questions, large and small, that motivate and drive us as archaeologists. 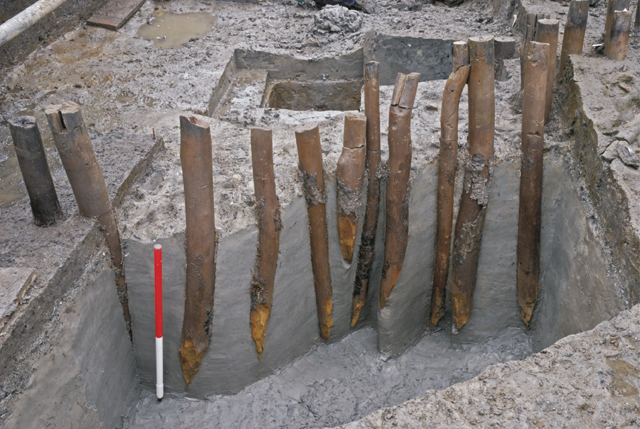