One of the most recent research components of the Must Farm pile-dwelling investigations has focused on the evidence for intestinal parasites present at the site. The paper, published in Parasitology, discusses the different parasites present in coprolites and related sediment and is available to read here:

The research identifies different species infecting the inhabitants of the settlement (and their pets!) alongside providing fresh insight into their lifestyle and culinary habits.

“Coprolites” are preserved faeces that have survived at Must Farm thanks to the waterlogged burial conditions of the river channel, above which the settlement was built. Once we reached the occupation deposits during the 2015-16 excavations, we quickly noticed coprolites emerging from the sediments in and around the stilted structures. The coprolites were fairly easy to identify thanks to their distinct colour and texture and we took samples from across the settlement and further up and down stream. 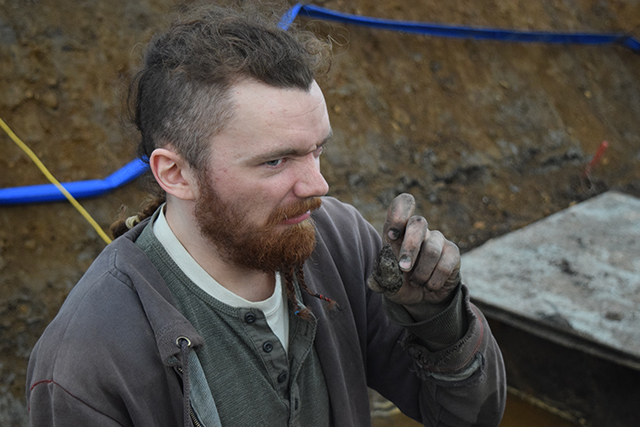 Excavating coprolites from the occupation deposits at Must Farm. The coprolites had a “unique” texture.

It is possible that the coprolites we encountered were deposited towards the end of the lifespan of the settlement, not long before the fire that destroyed the structures. Beneath the clearly definable coprolites was a thin deposit of more general “waste”, which probably reflects older faecal material that had begun to break down in the water. Many strands of evidence suggest that the occupation at the Must Farm settlement was short-lived, perhaps between six months and a year.

Numerous different coprolites were found at the site including human and dog faeces and analysis of these have enabled us to get an intimate view of the health of those living at the site and a more complete sense of what everyday practices were taking place there. 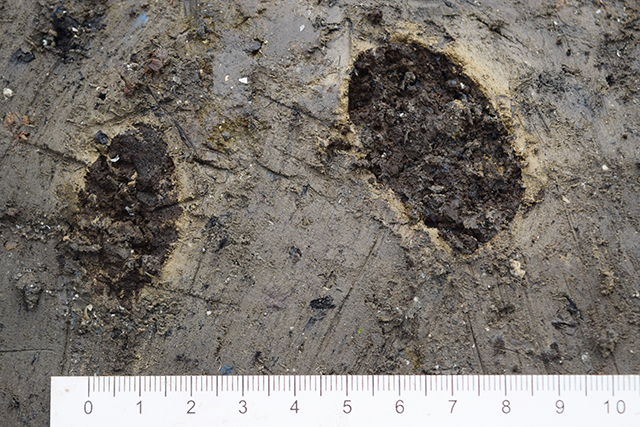 Coprolites in situ within the occupation deposits. Samples were taken from across the settlement and the river channel to examine their distribution.

We know from environmental evidence that the river channel, above which the stilted settlement was constructed, was characterised by shallow, slow-moving water. The channel would also have had thick growths of reeds and plants that would trap material creating a stagnant environment. Other evidence indicates that the inhabitants of the site would dump waste material, the everyday detritus, such as butchered animal bone and broken pot sherds into the river. This dumping created a “halo” of waste around the circular structures and this research suggests that faeces and urine were also deposited into the water below.

The slow-moving water of the channel combined with the excrement being dropped into it created a fertile environment for parasites which would have infected the wildlife present within the river. When the inhabitants of the settlement then came to consume aquatic animals from the channel, including fish and even amphibians and molluscs, if they were poorly cooked or perhaps even eaten raw there was the potential for the parasites to spread.

The research discovered that dumping their waste into the water below the settlement may have prevented roundworm infections, a parasite known to have been present at other prehistoric dryland sites. However, at Must Farm the research used microscopy to identify fish tapeworms, giant kidney worms and Echinostoma worms in coprolites in the channel’s sediments.

Animals present within the river would have been feeding and living in the water that was regularly receiving deposits of excrement. When the inhabitants of the settlement then consumed these, either raw or not properly cooked, the parasites found their way into new hosts. The effect of these parasites is particularly unpleasant to think about. Fish tapeworms can grow up to 10m in length in the intestines, giant kidney worms can cause kidney failure and the smaller up to 1cm in length Echinostoma worms can cause the intestinal lining to inflame. 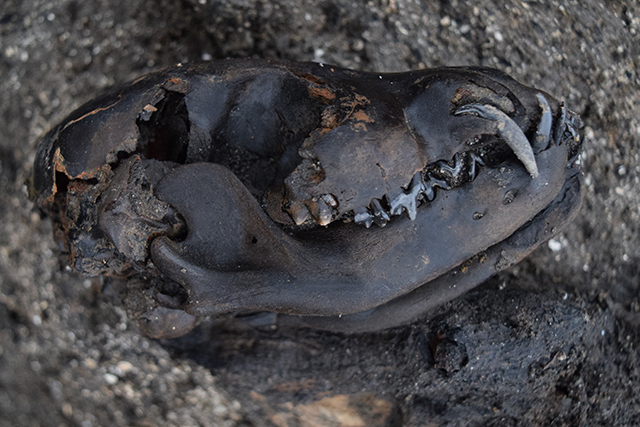 Other evidence of dogs, such as this skull, were recovered alongside the coprolites. The evidence from the dogs’ poo suggests that they were being fed similar food to the humans at the site. Could these have been the leftovers from meals?

Interestingly, the evidence from dog coprolites recovered from Must Farm suggest that the canine inhabitants of the settlement were infected with similar parasites. This strongly suggests that the dogs were being fed similar foods to the human population, perhaps from them sharing leftovers.

Examining Life at Must Farm

Much of the previous media coverage of the Must Farm settlement has focused on the fantastic material culture unearthed during the excavation. Images of hafted axes, discussions of woven textiles and the completeness of the assemblage have created a comprehensive picture of a settlement. Yet, it is the further post-excavation research, like this parasite study, that add texture to our understanding.

The clarity of the parasite information shows that the settlement would have been built above a shallow channel that regularly received human and animal waste. This information adds extra sensory information to the image of the settlement. Imagine the smell and visual character of the water that was sitting beneath structures people were living in. Were people emptying buckets of waste into channel or were they simply relieving themselves from the edges of the stilted structures?

Within archaeology there has occasionally been a tendency to sanitise the past and concentrate on its more appealing elements. Excavating preserved poo and examining the intestinal health and hygiene (or lack of it) in Bronze Age populations enables us to visualise a more realistic and fascinating understanding of the people who would have lived at this settlement.

At Must Farm the completeness of the archaeology means that all the evidence is meaningful. Nothing can be overlooked in identifying patterns and the practice of the people from the site. The parasite research is giving us fresh information to help flesh out new aspects of life at the settlement and is already complementing dietary information gathered from other analyses. The preservation of the context of the different forms of material and the environmental samples is enabling us to add further layers of understanding to our overall image of the site and its history.