After the Timber Platform was evaluated in 2006, and the scale and importance of the site became clear, a decision had to be taken on what should happen next. While it would always be fantastic to be able to excavate everything archaeologists discover this is not always possible or practical. After careful consideration, it was determined that the site would be preserved “in situ”. This means the archaeology would remain unexcavated and instead be preserved in its original location where steps would be taken to ensure it would remain undisturbed and undamaged.

Rather than just reburying the site and leaving it, regular monitoring checks were carried out to determine the conditions of the below-ground environment, such as the water-level, to ensure the material and environment remained the same. After a number of years of careful monitoring, it was decided to excavate the Timber Platform and plans for an open area excavation began to be drawn up. 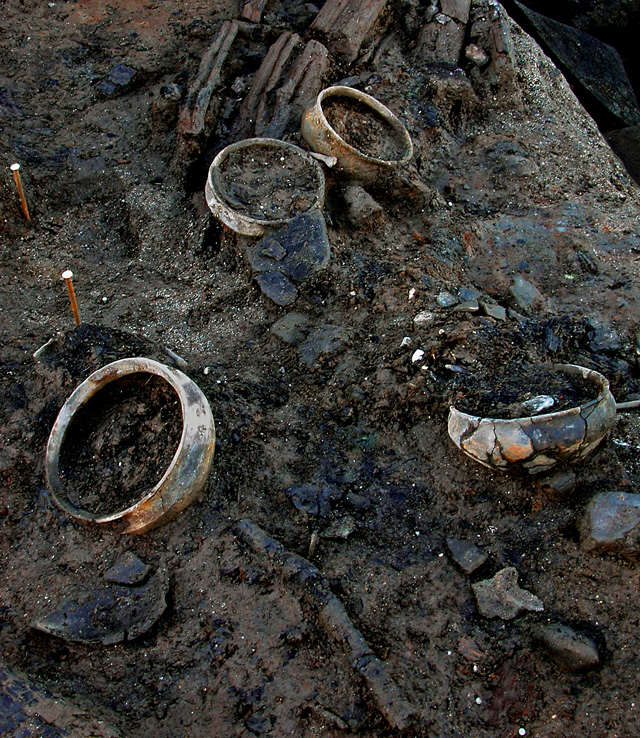 The 2006 evaluation had demonstrated the quality of preserved material which would be uncovered in this nine-month dig including wood, textiles and burnt debris. All of these objects exist in a very fragile condition requiring very delicate work not only to expose and clean them but to ultimately lift and preserve them. In order to protect as much of the site and its contents as possible, a specially designed warehouse was constructed over the Timber Platform.

Enclosing the space provides a number of benefits for the project. Most obviously it acts as a layer of protection from the elements. When the especially delicate burnt material deposits are exposed, they will be very vulnerable. This protective shell will keep out the worst of the weather, which can particularly problematic over a British winter. Not only will snow, gale force winds and rain be kept at bay but any extremes of temperature will be buffered by the structure. This is a huge benefit as it means archaeologists can concentrate more time on excavating the site without having to think about unpacking and rewrapping timbers at the beginning and end of each day. 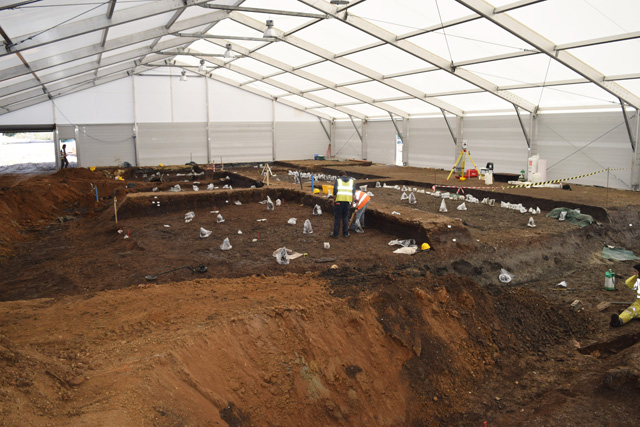 With the structure built, work on the site could begin in earnest. The archaeology began by bringing in a machine to carefully remove the sediments sitting above the site, as well as the rubble backfill used to cover the site after the work carried out in 2006. The evaluation was invaluable in helping to gain an idea of the formation of the site and how the deposits built up after it was abandoned. After the machining reached a level just above the upper river deposits the hand digging began.

The fire that destroyed the wooden platform and ended the activity on the site was a devastating event for the people who resided there. However, it has proven to be a real help for us! After the burnt remains of the settlement fell into the river they became buried by river silts, creating a nice seal to help preserve them. Thankfully, this layer of silt is also very easy to identify largely thanks to the amount of fresh water mussel shell fragments also present in it. 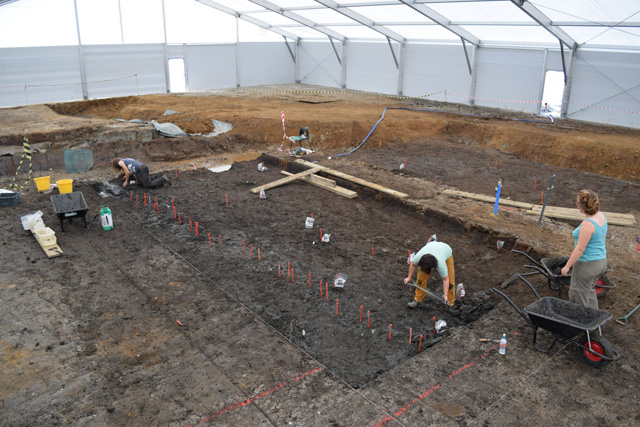 As the shelly silt sits above the rich, burnt material layer all we have to do is carefully hand dig down until we begin to see the shell fragments appear. Once we reach that level, we know we are close to the more delicate material and digging stops (at least for the time being). The process of exposing this shelly river deposit across the site is an essential first stage as we work methodically backwards through the site’s formation sequence.

However, this shell-rich river layer is not entirely devoid of archaeology. The upper portions of both the timber palisade and the interior wooden posts stick up through this deposit, giving us fresh challenges!