Dig Diary 37: Decoration and the Must Farm Settlement: Part Two

In the previous part of our site diary we began discussing the decoration of the material at the Must Farm settlement. We described the completeness of the assemblage and started describing decorations relating to the pottery we have recovered and examined so far. This week we continue to detail more interesting trends in the decoration, including wooden objects and textiles.

As we have described in previous blogs, the quantity and range of wooden artefacts found at Must Farm is absolutely astonishing. We are finding wooden objects in large numbers and we are still trying to understand what some would have been. Many of these artefacts are largely unique and attempting to work out precisely what they would have been used for will form a large element of the post-excavation process. However, very little wood seems to have been decorated or embellished in any way: most objects seem relatively plain and understated in their design and construction. 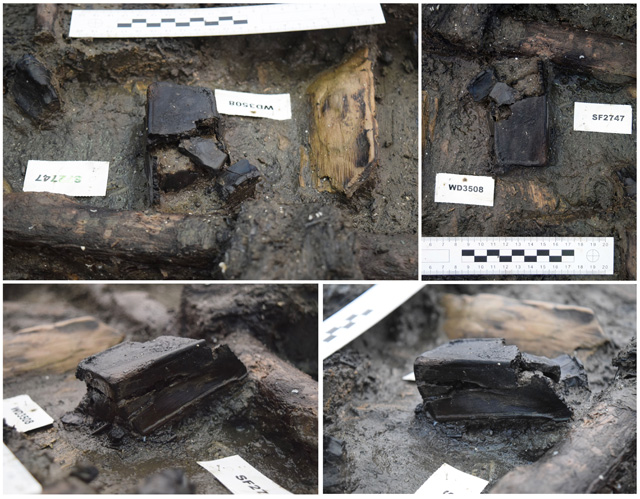 A wooden box found beneath Roundhouse One. The box is fairly delicately worked but is not decorated at all.

This absence of decorative elements in the wood assemblage is very unlikely to be a consequence of preservation as even some of the most delicate objects are surviving intact. Intricate and carefully crafted objects, such as the wooden box we discovered in February are entirely plain. Similarly, the dozens of wooden platters, buckets and vessels are all undecorated and very simple in design. They are all well-made and skilfully crafted but it is clear that their makers did not feel it necessary to decorate them.

One of the only clear instances of decoration on a wooden object comes from a fragment of a wooden bowl. Around the outside of the vessel, close to the rim, is a fairly thin straight line that seems to mimic the shoulder of a fineware pottery bowl. It is possible that this simple design element was added to create a similarity to the ceramics from the settlement, but it is difficult to tell at this early stage without more investigation. 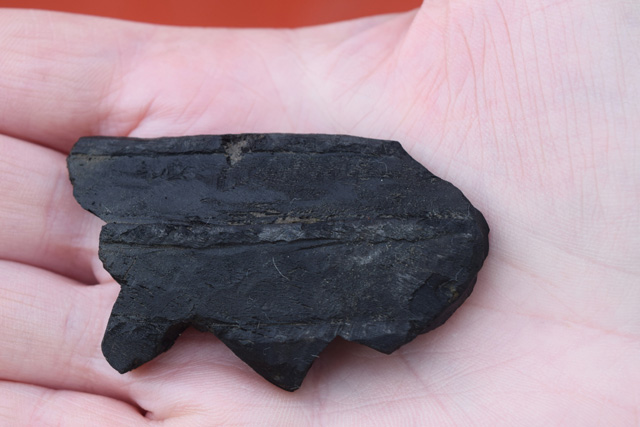 A wooden bowl fragment that is one of the few wooden artefacts that have evidence of decoration on.

In a similar manner to the ceramic assemblage, the wooden artefacts we are uncovering all seem to be largely plain and simple with few additional frills. These are all clearly well-crafted objects, not hastily made rough items but it did not seem necessary for their creators to elaborate them beyond their initial design.

We are still at any early stage of analysis of our textiles, however there does seem to be some evidence here of decorative elements to this material. Some fragments that we recovered in 2006 display evidence of small traces of decoration including fairly simple tassels and knotted hems. Again, these seem to be rather simple and largely plain although much more information relating to these textiles will emerge as our analysis continues.

After first discovering textile during the 2006 excavation we were hopeful it might be possible to identify what colour the materials may have been. However, the preservation of the textile fragments we have found is down to the charring of the plant fibres which carbonises the fibres. This carbonisation prevents decay but also removes any possibility of being able to see colours within these fibres. Effectively we are viewing the textiles in “black and white”. It is therefore currently not possible to know if these textiles may have been decorated with colour. 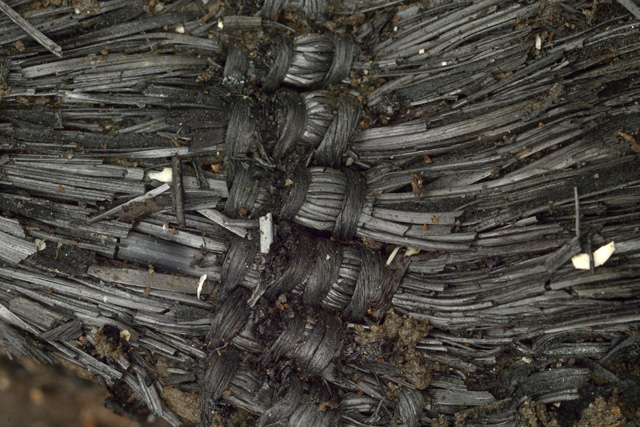 Image of textile recovered in 2015. Some fragments have tassels and knotted hems on. It is not possible to tell if the textiles were coloured owing to preservation conditions.

However, there is one category of material that has unavoidable associations with decoration: beads. During the 2006 excavation we found a number of glass beads, which are likely to have travelled thousands of miles to reach Must Farm. These beads will have almost certainly had a decorative role and there is a range of colours and sizes. However, the number of beads we have recovered is still relatively small. It is possible we have lost beads and are not seeing the complete range. When the glass was heated by the fire in the buildings and subsequently fell into the cold water, many beads exploded and shattered into minute fragments. Most of the beads we recover are either complete or largely whole, so it is probable we are missing those which disintegrated as a result of the fire.

It is currently difficult to know precisely how decorative and embellished textiles were. Equally, we know that beads are present but until we have completed the excavation, and have a better idea of their numbers, we won’t know how common they were. However, at this early stage it doesn’t seem like the textiles were very elaborate, instead being relatively modest.

Before we began excavating the Must Farm settlement, we knew we would find a remarkably well preserved site that would have a large assemblage. Many people speculated that we would find many decorated and carved objects which are normally absent from the archaeological record. However, this definitely does not seem to be the case. While we do have some instances of decoration they are fairly modest and simple unlike the much more ornate designs from the subsequent Early Iron Age.

The rather understated finishes of our burnished pots and the lack of embellished wooden objects fits into a trend that is rather familiar in the Late Bronze Age in Britain. Many of the most well-documented artefact types, such as pottery, are known to be fairly “plain” across the country. It isn’t until later periods that ceramics become more elaborate with geometric designs and a greater variety of finishes added to both the interiors and exteriors of pots.

Photograph of some beads recovered from the 2006 evaluation. They are definitely decorative but what how prominent were they in daily life?

The Must Farm settlement’s excavation seems to be confirming that this trend of a general lack of decoration is continuing in materials and objects which are less commonly discovered. Out of the thousands of pieces of timber and dozens of wooden artefacts there is a very clear absence of decoration and elaboration. This absence does not seem to be an anomaly of preservation, rather a conscious decision by the makers to focus on the form of the vessel. The overall shape and style of artefacts seems far more important than specific instances of “decoration”.

While decoration is largely absent, all these artefacts have a very distinct style and appearance. This style appears to be a direct representation of the “fashion” of the time: these forms and shapes were what people wanted in everything from pots to wooden objects.

We believe the homes at Must Farm represents a fairly typical Late Bronze Age settlement in this landscape. If this is the case, then it suggests that the objects and materials that people used in their daily lives were largely unadorned and modest. Despite this lack of embellishment all these items, pots, textiles and wooden artefacts were exceptionally crafted and were in no way “basic” or rudimentary. This suggests a distinct stylistic preference which will be absolutely fascinating to explore further. More detailed analysis will have to wait until post-excavation when we can explore the complete assemblages. However, these early observations are providing us with some tantalising glimpses into craftsmanship and preferences during the Late Bronze Age.