Back in January, we described our initial investigations into the large oak posts that formed an earlier element of the Must Farm site: the timber causeway. From dendrochronology we know that the felling dates of some of these timbers fall between 1283 – 1246BC, which pre-dates the rest of the settlement by several hundred years. Over the past few weeks we have been investigating this earlier causeway in more depth, looking at the uprights and also the material associated with it.

One of the most immediately striking elements of the timber causeway is the sheer size of the enormous oak posts which would have supported the walkway. These timbers are absolutely huge, both in terms of their length and diameter. Some are sunk into the river sediments to depths in excess of three metres. This was clearly a very substantial structure that would have required a significant number of people working together to create. 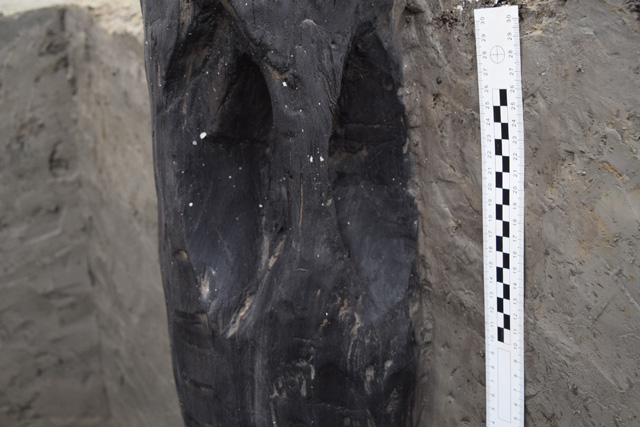 Image showing the substantial nature of the oak causeway posts and the large “handholds” carved out of them.

When we first began to understand the causeway in more detail, comparisons to the nearby Flag Fen were striking. Both sites had timber causeways and these wooden walkways seem to have been created to connect areas of higher, drier ground. The dating between the two sites was also very close, the first row of posts from the Flag Fen causeway fall into an almost identical age bracket, 1287-1242BC, as the dated example at Must Farm.

However, the majority of the archaeology at the Must Farm site concerns the charred remains of the settlement that was constructed there, a settlement that post-dates the causeway by almost three hundred years. From the evidence, it seems that the causeway had fallen out of use and was in a state of disrepair by the time the houses and palisade were constructed. Traces of the wooden causeway would have remained visible such as the tips of the uprights emerging from the river. However, most of the settlement archaeology ignores the causeway: the palisade and several houses were built above the line of timbers.

The location of these two separate wooden constructions at the same site is particularly interesting. Was it done for a reason or could it simply have been a coincidence? It seems unlikely that building a settlement at Must Farm happened by chance. The fact that the remnants of the causeway would have still been visible suggest the site was chosen for a reason. Did the causeway still hold some significance? Could the timber walkway have been used as a route, one which was still in use? It is difficult to answer such large questions at this stage. However, it will be an area we will explore during the post-excavation process. 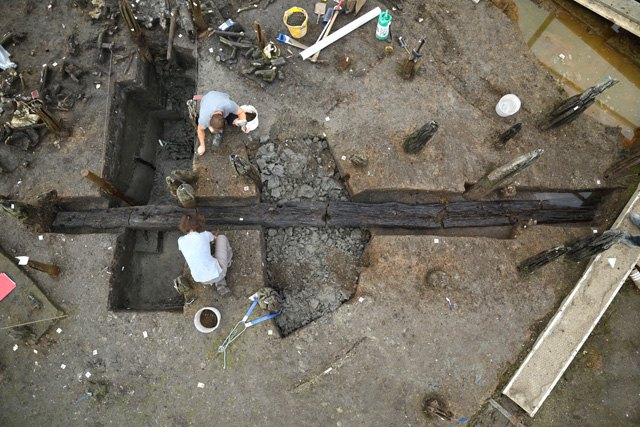 Image showing the enormous size of some of the causeway posts, this giant oak timber is even larger than pictured!

Alongside the raised uprights that would have supported the causeway, we have other evidence of the enormity of the timbers used in its construction. Towards the end of the excavation we revealed an absolutely gigantic oak timber, well in excess of seven metres in length. This absolutely monstrous piece of wood seems to have been part of the causeway and it is incredible to think of it being moved into position 3000 years ago. Excavating such a huge piece of timber was far from easy and required lots of preparation and care. Owing to its size, we are still in the process of examining the wood and recording information such as evidence of working and various details along its length.

Piecing together a more thorough understanding of the causeway will continue during the post-excavation process. As it is by far the earliest element of the Must Farm site it has only just been explored as we work backwards through the archaeology; beginning with the latest events first. There are lots of fascinating questions to explore. We’re very keen to see if there are differences in the working techniques on the causeway posts in comparison to the structures from the settlement. Equally, could the timber used come from similar sources to the houses?

Deposition and the Timber Causeway

One of the most exciting elements of the excavations of the Must Farm settlement has been the discovery of metalwork, alongside other artefacts, situated in their domestic contexts. We are finding virtually complete inventories from each of the houses, including scarce material such as fabrics and food residues. However, the artefacts associated with the causeway represent a different type of deposition that occurred during the Bronze Age. This deposition occurred long before the settlement was constructed and involves a range of different artefact types. 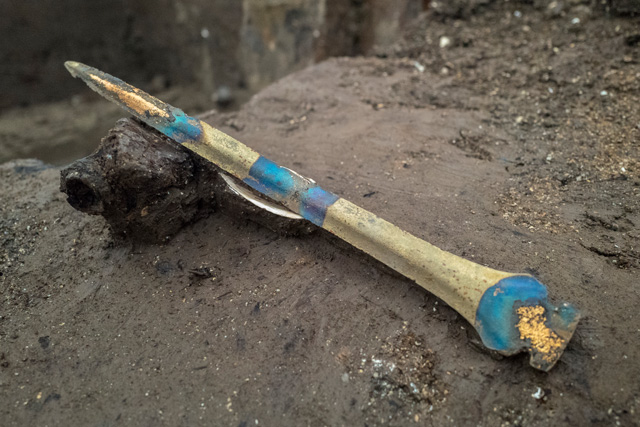 Bronze Age rapier found in river sediments linked to the causeway. The blue colouration is a result of alkaline-rich silts in the river causing a form of corrosion on the metal

Along the length of the timber causeway, we’ve found various metal finds that seem to have been very deliberately deposited. This kind of “votive” or “structured” deposition is a phenomenon that is well known during the Bronze Age, especially related to metalwork. Metal artefacts are often intentionally damaged prior to their deposition; usually being bent, broken or misshapen. Commonly this happens in watery environments such as lakes and rivers, which fits with our causeway crossing over the river channel at Must Farm.

One of our earliest metal finds associated with the causeway was a short, bronze sword or “rapier”, of a relatively uncommon type. This was deposited in the river sediments close to the large oak uprights that formed the causeway and was in exceedingly good condition. Other swords have also been recovered, though some of these have been bent and misshapen, consistent with many other Bronze objects found in similar contexts. Other artefact types include spearheads and a particularly beautiful quoit-headed pin. 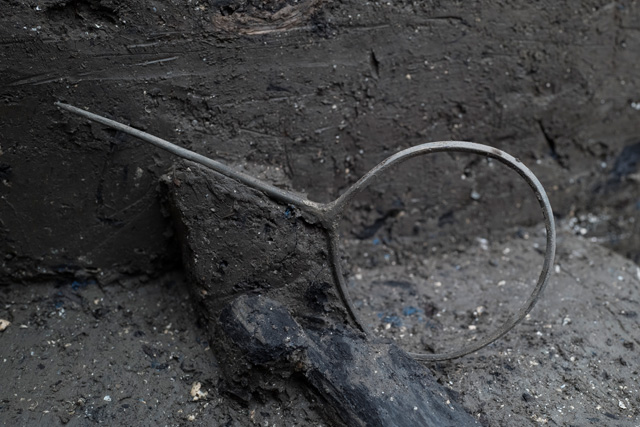 We are especially excited to compare the metalwork with the artefacts from the domestic contexts of the settlement. Already, we have far more tools from the houses while most of the deposited metal from the causeway is either a weapon or a decorative object. However, being able to study the entirety of both these different aspects of the site will be fascinating as it is so unusual to find metal artefacts in domestic settings from the Bronze Age.

The timber causeway is yet another fascinating aspect of the Must Farm site, with archaeology and finds familiar though different from the settlement. With Flag Fen and similar sites already known nearby, exploring the causeway is another element in helping to understand Bronze Age Fenland on a landscape scale. Placing Must Farm, both its settlement and causeway, inside a larger landscape context is crucial to helping understand the Bronze Age in a more meaningful, detailed way.