During the 2015-16 excavations at Must Farm we uncovered the remains of a Late Bronze Age settlement. The settlement was made up of structures built atop piles driven into a river channel and surrounded by a palisade. Evidence from the site suggests that it was occupied for approximately a year before a catastrophic fire destroyed the buildings. More information can be found in our recent article in Antiquity which provides an overview of the site, its archaeology and our initial thoughts on the lifespan of the settlement.

One of the key aspects of the Must Farm pile-dwelling settlement is that it is incomplete. It seems that approximately half of the settlement, and the river channel it was built above, was quarried away in the late 1960s. It was only owing to this activity that the site was found at all, as timbers that would have otherwise been buried several metres below the ground were visible along the old quarry edge.

This incompleteness has created many questions, some of which we will likely never have definitive answers to. How large would the whole settlement have been? How many buildings would the site have? How many people lived there? Did the palisade fully enclose the settlement? How did people access the site? Our recent post-excavation work has shed new light on this last question and we are gaining fresh insight into one of Must Farm’s more unusual structures: Structure 4. 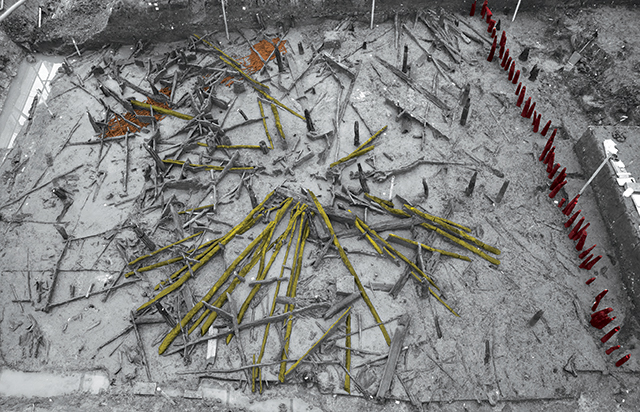 Photograph of Structure 1 showing the timbers of the roof fan highlighted in yellow.

As we reached the “wood mass”, the remains of the settlement’s structural material that had collapsed into the river channel following the fire, it became clear that much of the debris had retained its original shape. Perhaps the most visual of these examples were roof fans which helped us identify the footprint of individual structures. Indeed, these roof fans proved extremely valuable and allowed us to develop effective excavation strategies for recording and recovering material efficiently and safely.

During the excavation we were keen to discuss our understanding of the settlement and its structures, sharing early diagrams depicting the pile-dwellings such as this one featured in a Dig Diary from March 2016. 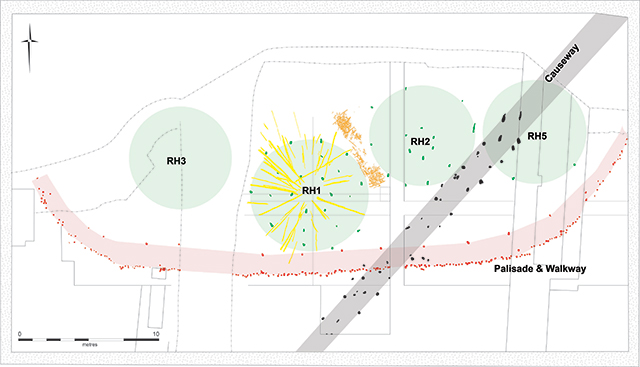 Early working diagram produced during the excavation to roughly show the positions of the settlement’s structures.

The image clearly shows the round Structures 1, 2, 3 and 5 but where is Structure 4? Many people contacted us at the time querying our numbering or asking where the missing structure was. If we compare this plan to the more up-to-date post-excavation version below, Structure 4 is connected to the palisade and, more interestingly, is square rather than circular. Why was this structure more difficult to identify and how have we come to better understand it during post-excavation? 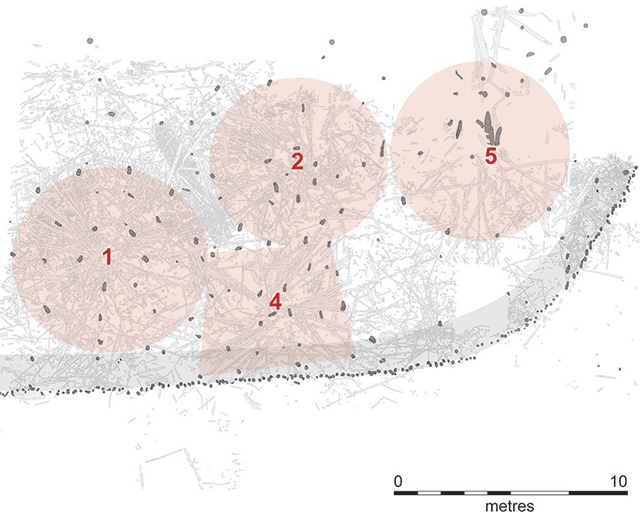 One of the reasons it was difficult to decipher Structure 4 during the excavation was its situation within the settlement. The structure’s position was partially built over a timber causeway that pre-dated the settlement (more information on this feature can be found here). Additionally, Structure 4 was also cramped against the palisade running around the site.

Both these factors made it hard to distinguish the different components, especially when combined with the presence of the wood mass. While Structure 4 did have the remains of a roof fan, its footprint did not resemble the other pile-dwellings. At the time it was hard to know whether this was a consequence of how the structure might have collapsed or a result of deliberately different architecture. We knew there was some form of building in this area, but it has only been through post-excavation analysis that we have a stronger idea of the shape and potential functions of this more unusual structure.

Structure 4 required more complex study to define. Using careful scrutiny of the excavation plans combined with wood species identification we were able to separate the timbers from the structure from the earlier causeway and the palisade. We also examined the conversion of the wood (how it was split, worked and shaped) to spot differences and help connect each timber to the correct architectural feature. Finally, we were able to tie timbers related to the palisade together as many had been deliberately de-barked before being used as stakes or similar. 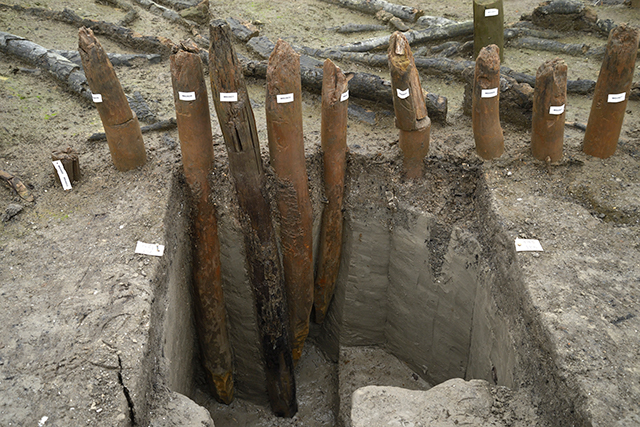 It was necessary to carefully examine all the upright timbers to help differentiate stakes in the palisade from other structural features.

With this understanding it is clear that Structure 4 was integral to the palisade. There is also evidence that the palisade had an interior walkway that ran around its length and Structure 4 also appears to provide access to this. Why was Structure 4 so different in character from the other pile-dwellings at the settlement?

As we examined Structure 4 more closely and explored the material associated with it, we noticed more key differences from the other buildings at Must Farm. Was this enigmatic square structure a dwelling or an entrance into the settlement?

In our next post-excavation diary we go into more detail about the contents of Structure 4 and our current interpretations of it as a formal access point to the Must Farm settlement.