Dig Diary 18: Looking Inside and Outside Roundhouse One

In previous diary entries we have gone into detail about our approaches to excavating the occupation deposits and the material we are expecting to uncover. We also described how we were expecting that there would be two distinct “layers” of archaeology created as a result of the destruction of the house. The upper layer is the wood deposit, comprising the more buoyant material from the settlement that would have floated in the river for a time before sinking. This is the material we have been working on for the previous few months. Underneath, the lower layer would consist of heavier material, such as pottery, bone and querns, which would have immediately dropped to the bottom of the channel.

We always expected that the separation of these two layers would be a little blurred, especially given the uneven nature of the bottom of the river channel. As we began to excavate the occupation deposit it became clear that there were differences in its character, especially directly underneath the building’s footprint. As such, it became necessary to remove the occupation layer in stages, to ensure we were maximising the amount of information that could be gained from the material. 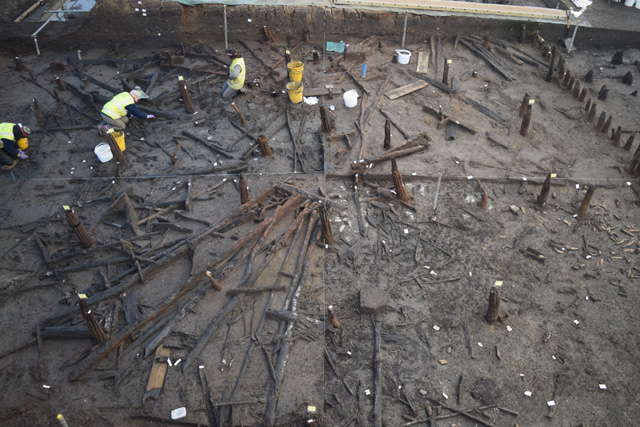 Image showing quadrants of round house as we excavate occupation deposits

Looking Inside Roundhouse One

We have currently finished our initial excavation of the first, second and third quadrant in “Roundhouse One” and are well on the way to doing the same on the second. Already we have begun to notice some really interesting differences between material inside the roundhouse and that outside of it. We already mentioned in our previous blog that there is some fascinating patterning in the animal bone clusters. Inside the house, in the southwest quadrant, are the remains of sheep, predominantly lambs, while outside are the butchered remains of pigs and deer. 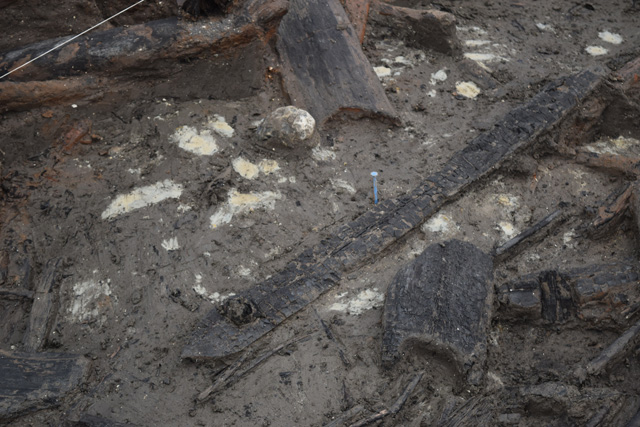 Photo of unburnt clay patches clustered around the interior post ring. What are they?

Inside and within the central ring of oak uprights is a distinct concentration of fairly small, clay patches or “blobs”. These patches vary in size but are generally around 10cm formed into roughly sub-rectangular or broadly circular shapes. There is no clear pattern to their position, other than the proximity to the centre of the structure. However, there are also occasional blobs of clay further away with the same texture and colour to them. What is particularly unusual about the clay is that it appears largely unburnt: especially odd in a structure where most other material has suffered fairly heavy fire damage.

What could this clay represent? The fact it is clay and located near the centre of the building immediately brings to mind a hearth. However, if this is the case why isn’t the clay burnt? Surely if it was used as a hearth then there would be some evidence of heating, at least from one direction. Equally, even if it was a fairly new hearth, why hasn’t the clay been burnt by a fire that was hot enough to heavily char timber and vitrify food remains?

It is a puzzling question and one of the problems we love to think about as archaeologists. Digging such an incredible site is fantastic. Being able to recognise structural elements that are still familiar to us today creates such a unique connection to the Later Bronze Age. Just as exciting is the mystery of finding unusual and confusing aspects of the house and trying to work out both what they represent and how they ended up in their present condition. It may take a lot more excavation and the help of various scientific techniques, but we should be able to work out the purpose or function of these clay patches. 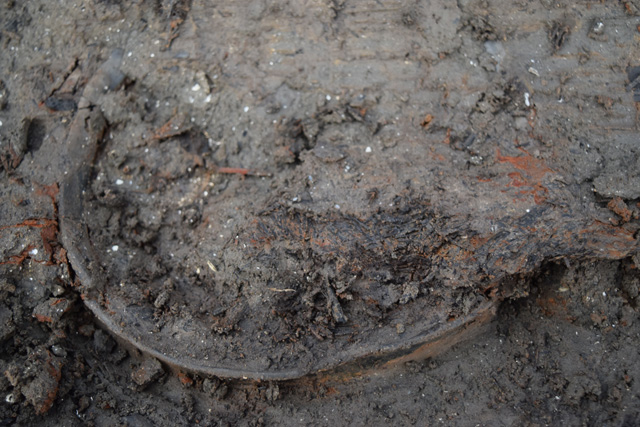 Complete vessel beginning to emerge from the occupation deposit

Lots of pots are emerging from the sediments of the north-eastern quadrant of the occupation deposit. All those found within the limit of the uprights of the house’s footprint seem to be intact. This is really exciting and suggests that even though the vessels were displaced as they fell into the river once the stilted floor collapsed, there is still a sense of completeness to them. Given the character of the pots discovered during the 2006 evaluation, we are very hopeful that these complete vessels will contain more residues that can be analysed. 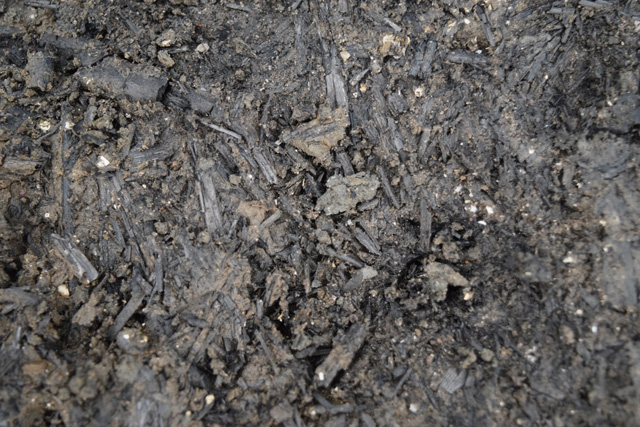 Close up of small fibres from a thatch-like material. Reeds?

One element of the occupation deposit that is very exciting is the presence of fairly large amounts of a burnt organic material. While we haven’t had chance to investigate this in great detail, it looks like it may be the remains of thatch material made from reeds. In certain areas it is possible to identify the specific events that led to its preservation. When we have recorded and examined a timber in situ, we remove it and often underneath some of the larger structural pieces are dense clumps of thatch-like material.

We suspect that as the building collapsed, large areas of the thatch fell into the river below. These clumps would have been fairly buoyant and could have floated on the surface for a time. As the fire continued to damage the structure, bigger timbers would have fallen into the water and this layer of floating material. The big pieces of wood are likely to have caught the thatch, dragging it down with it and trapping it in bigger clumps on the bottom of the channel. It was this process of “pinning” the light, carbonised organics to the non-porous sediments that helped to ensure the preservation of the thatch. It is likely the remainder of the material floating on top of the water would have gradually broken apart and floated away in the river.

Looking Outside Roundhouse One 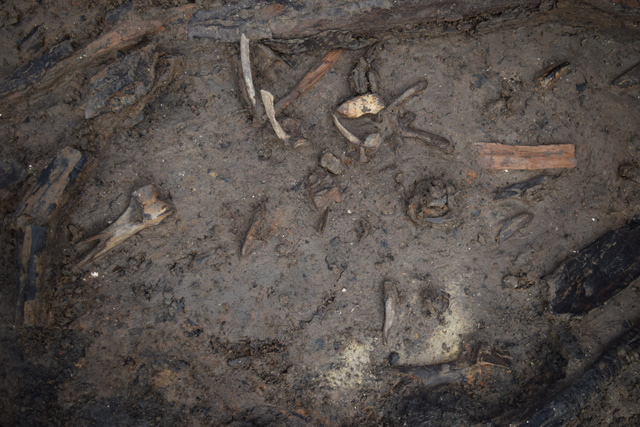 Cluster of animal bone outside roundhouse one. Contains deer and pig bones

There are also some developments we are noticing in the areas surrounding our first roundhouse. One of the most interesting is the difference in the character of the material we are discovering. While we are still at an early stage looking at these deposits, it currently seems that the majority of the material, particularly animal bone and pottery, is broken. Most animal bones are displaying signs of butchery and ceramics are not complete, instead being fragmentary sherds.

It would be fairly easy to categorise this material as more reflective of “waste”, broken pot fragments and old bones from meals. We speculated, earlier in the excavation, that there could be a ring of debris and “rubbish” surrounding each of the houses. Once a pot had broken or a meal had been cooked, the pieces could have been simply thrown outside the building to fall into the water below. While we are still at an early stage at examining these deposits, especially towards the edges of the settlement, this is already an interesting potential pattern we are looking into.

Scattered across the site, in the areas outside of the roundhouse and the occupation deposit are fairly large quantities of unburnt woodchips. These small pieces of wood are the construction debris from the settlement. Interestingly, we are recovering both ash and oak woodchips. The palisade is made from ash, while the uprights of the house are made from oak. It seems from the presence of so many of these woodchips is an indicator that the different components of the settlement were created on site rather than elsewhere and brought in.

Throughout this whole process, we’ll be taking fairly intensive environmental samples, continuing to use photogrammetry and illustration for areas and artefacts and ensuring that all our recording is as thorough and comprehensive as it can be. As we are getting to understand and appreciate the Must Farm settlement in greater detail, we are discovering more and more questions we want to answer. With so much archaeology left to reveal we are all very excited how much more we can learn about Later Bronze Age life.