Dig Diary 5: Revealing the Remains of the Fire

A few weeks ago we described the process of Uncovering the Archaeology at the timber platform site. The largely sterile upper river silts have now been mostly removed across the area of excavation. What we are left with is a shell-rich layer that sits directly above the charred remains of the platform. The vertical timbers of the palisade and platform poke up through this deposit, giving us a sense of the shape of the settlement. Alongside the cleaning and continual care of these wooden uprights we are now beginning to remove the shelly deposit to uncover the burnt “wood mass” that lies underneath.

When the fire tore through the timber platform its cultural material became separated. The settlement was built on posts above the river and as the fire caused it to collapse, objects from inside would have dropped into the water below. Heavier items including tools, pots and quern stones would have immediately sunk to the bottom. However, structural timbers, thatch, floor matting and even textiles would have floated on top of the water before eventually sinking. This more buoyant material is referred to as the “wood mass” owing to the concentration of charred timbers present within the deposit. 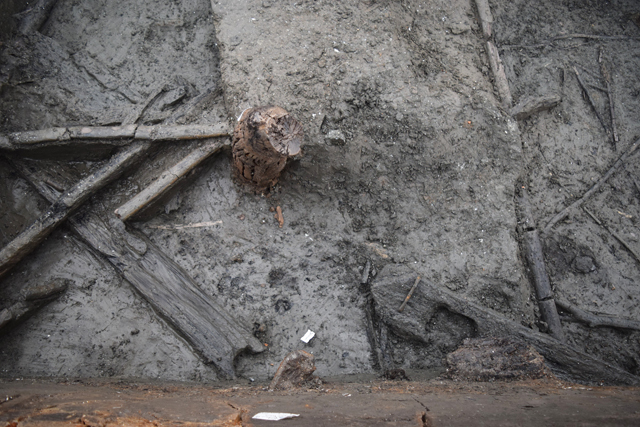 The sudden transition from hot to cold had varying effects on the material, some good and some bad. This “thermal shock” could be destructive: it caused most glass beads to shatter and quern stones to fragment. Yet, it also helped to preserve the textiles by extinguishing the fibres before they were burnt away entirely, leaving them carbonised.

As certain materials floated for some time before sinking there is a distinct separation between heavier and buoyant objects. Having material split in this way is ideal for us as it creates two different deposits that can be readily identified archaeologically. We prefer to dig material in a logical sequence and having the bulk of the burnt material divided in this way makes it ideal to expose and explore in two stages.

Currently there is still a shell-rich layer between us and the wood mass, which we are beginning to remove. This is not an easy task as we have a very large area to cover and we have to be very careful whilst doing it to avoid damaging any of the timbers we find. Rather than attempting to expose the entire wood mass in a single go, we are doing so in smaller areas. This is not only more manageable but makes it easier to record using photogrammetry. 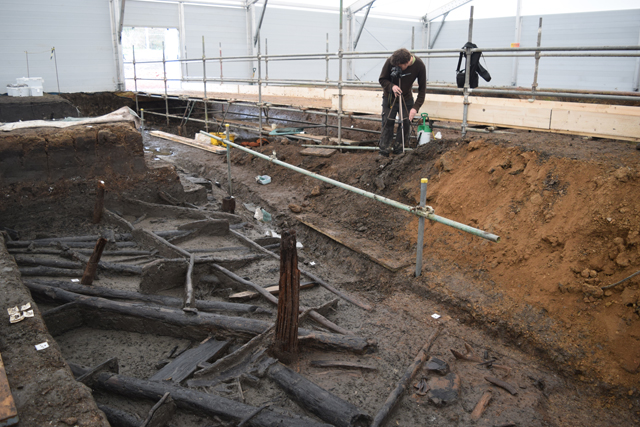 In order to uncover the timbers we use trowels and small, wooden tools to remove the majority of the shelly deposit sitting above the wood mass. Doing so allows us to gauge the density of burnt debris and to check for signs of artefacts emerging. Occasionally small patches of charred fibres are present requiring additional care and attention to avoid them degrading.

After uncovering the timbers we then have to thoroughly and delicately clean the area. As there is no longer any shell-rich “cushion” of material above the wood mass we cannot easily get to the timbers to do this without causing damage. There is also the possibility that walking on this area could break objects sitting underneath this thin layer, where the heavier material was deposited.

Our solution is to construct a series of scaffold frames which sit above the areas we are working on, allowing us to access any part of the wood mass without causing damage. From these frames we are able to remove any remaining shelly material left behind from the initial excavation (usually where timbers intersect). We also clean each piece of wood in situ ready for photogrammetry and to check for any evidence of working. 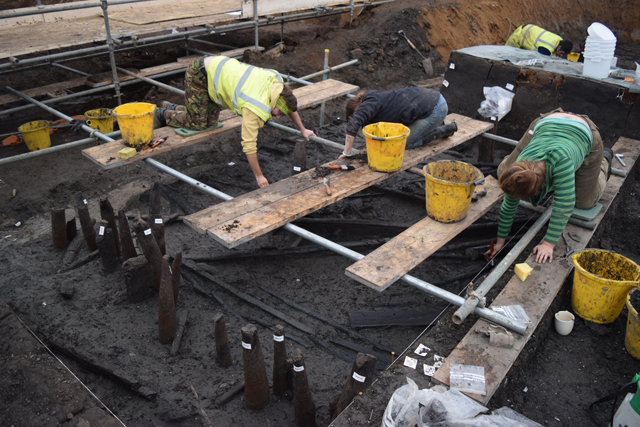 After the area has been recorded using photogrammetry and record shots we begin the process again, working methodically across the site. Ultimately the entire wood mass will be uncovered at the same time, which will give an incredible overview of the charred remains of the upper level of material from the settlement. However, thankfully we don’t have to wait for this to begin to understand more about the site. Already we are making some fascinating discoveries which we’ll be covering over the next few weeks.