Must Farm’s post-excavation analyses involve dozens of different scientific techniques ranging from microscopy and radiocarbon dating to the examination of organic residues and forensic fire investigation. Many of these techniques directly complement one another and all of them add to our overall understanding of the site and its material.

Recently, stable isotope analyses have been carried out on plant, animal and human remains from the Must Farm pile-dwelling. These analyses are starting to shed fresh light on diet and activities at the site and are making us think carefully about the settlement and its wider surroundings.

Isotopes are extremely useful for archaeological research and enable several different types of scientific investigation. Isotopes are atoms of the same element that contain an equal number of protons but a different number of neutrons, giving them a different atomic weight.

Some isotopes are radioactive and gradually decay. These can be used to date archaeological material. The radioactive isotope of carbon, C-14, is commonly used for this, hence the term radiocarbon dating. However, stable isotopes do not decay over time and this persistence allows archaeologists to explore past diets and environments. 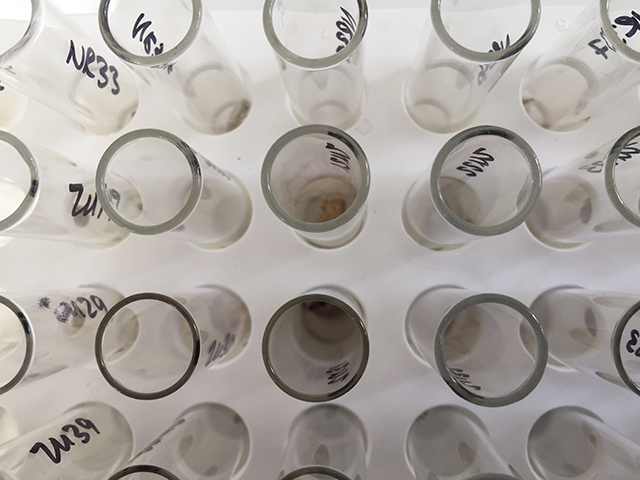 As people live their lives, isotopes present in the food they eat and the water they drink are incorporated into their bones and tissues. By taking samples from these remains and scientifically examining the isotopes present in them, typically ratios of carbon types (C-12 to C-13) and nitrogen types (N-14 to N-15), it is possible to understand diet and the environments in which people lived.

At Must Farm samples were taken of animal, human and charred plant remains and stable isotope analyses (C and N) carried out on them. Interestingly, several key findings appear to be emerging from this post-excavation analysis.

During the 2015-16 excavations at the pile-dwelling settlement several “caches” of seeds and grains were discovered. Caches included barley, emmer wheat and flax and several were sampled using stable isotope analyses. The analyses revealed a notable similarity between the nitrogen isotopic signatures of all three types of plant remains. This similarity suggests that it is possible that these wheat, barley and flax plants were all growing in the same place. 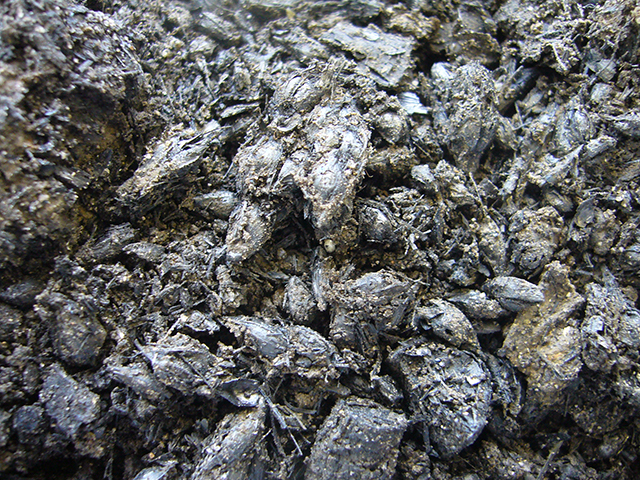 One of Must Farm’s charred seed/grain “caches”.

Even more exciting are the carbon isotopic signatures from the caches of emmer wheat. These grain signatures are similar enough that they may not only have been collected from the same place, but during the same year. These caches could well be the result of a single harvest, evidence which supports our current understanding that the Must Farm pile-dwelling settlement was short-lived.

Faunal remains were a common part of the assemblage of material from the site. Examining the animal bone has already started to provide additional insight into activities on the site (see Post-Ex Diary 6: Refitting Must Farm). Three significant species present in the settlement’s assemblage were sheep (both lambs and adults), pigs and deer.

Stable isotope analyses of the young sheep associated with the pile-dwellings has shown that they had different diets from many of the adult sheep at Must Farm. The butchered remains of the mature sheep from the site had isotopic signatures suggesting they were grazing more widely in the surrounding landscape. Given that sheep are susceptible to foot rot in boggy, wetland environments it is likely that the flocks were kept further away from the site on drier ground.

We know from the presence of articulated lamb bones and carbonised sheep/goat droppings associated with the content of the pile-dwellings that these animals were present in the structures. The difference in these lambs’ diets from their adult counterparts grazing elsewhere goes beyond variance from them drinking milk. It seems that the lambs and their mothers were being given carefully chosen fodder and kept deliberately in the settlement.

This raises some fascinating questions, not least the issue of keeping lambs and young sheep in pile-dwellings above a river! Where were these animals living inside the structures? Does the presence of articulated lamb bones and carbonised droppings suggest that some didn’t escape the fire that destroyed the settlement? Lambs are far more vulnerable than adult sheep, so were they being kept in the settlement to give them additional protection? It may also be possible that the lambs were being familiarised to people at a young age to make flock management easier when they were fully grown. 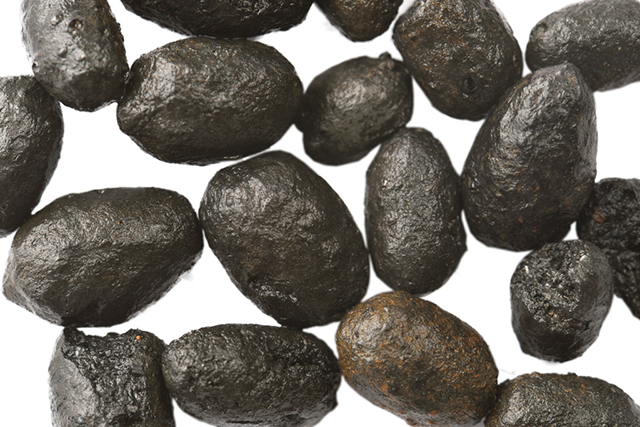 Carbonised sheep droppings associated with the Must Farm pile-dwellings.

The stable isotope analyses of pig and deer remains have also revealed interesting differences. Pigs’ dietary signatures suggest they were ranging in different parts of the landscape to the adult sheep. Red deer from the site have signatures that indicate they were moving between different habitats, likely both areas that the sheep and pigs were using.

Dogs were also present at the settlement and we know from the coprolite evidence (see Post-Ex Diary 16: Parasites and Lifestyles at Must Farm) that they were eating some of the same food as the site’s human occupants. Stable isotope analysis also indicates that the dogs were eating similarly to their human counterparts, making it likely they were being fed the scraps of meals.

Very few human remains were found at the pile-dwelling settlement and they may have been the “curated” bones of deceased individuals being kept within or around the structures. Stable isotope analyses of the human remains indicates that their diets predominantly consisted of terrestrial foodstuffs. Indeed, there is very little evidence for the significant consumption of freshwater resources.

Interestingly, this evidence initially seemed to contradict the coprolite and parasitology analyses which showed the presence of fish within the diet of Must Farm’s human and canine occupants. However, these coprolites likely represent the most recent “deposits” and do not necessarily represent regular meals (the apparent contradictory evidence being more a matter of resolution). While the people and dogs living at the settlement certainly consumed freshwater resources, the isotopic signatures from their bones suggests that over time the bulk of their diet came from terrestrial sources.

Not only does the stable isotope evidence provide fascinating insight into the diets of the people and animals at Must Farm but it makes us think carefully about the past landscapes that surrounded the site. The isotopic signatures from the charred plant remains give us information on their growing environment and the faunal remains enable us to understand the conditions these animals lived in. 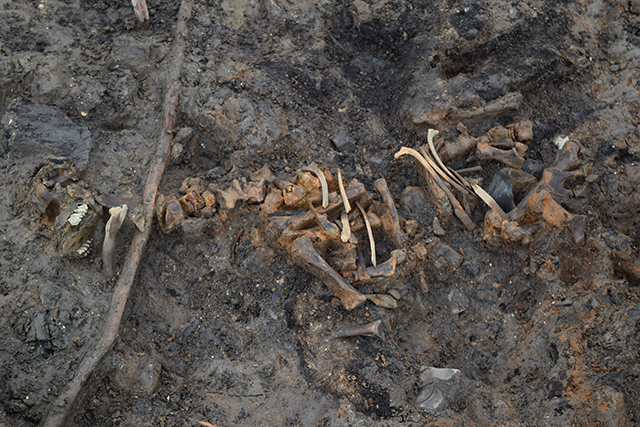 While the Must Farm pile-dwelling settlement is an incredible site on its own, it did not exist in isolation and appreciating the wider landscape it was situated in is critical to understanding the archaeology, its inhabitants, their livestock and crops.

The Fens is a dynamic, changing landscape and appreciating its different soil types, topography and sediment depths is so important at creating an accurate picture of Must Farms prehistoric environment. Since the earliest work at Flag Fen, through dryland excavations at Bradley Fen and borehole sampling across Fenland, archaeologists have built a picture of the Bronze Age landscape using soil and pollen evidence. Importantly, this image develops over time and appreciating these changes from millennia to millennia is critical at placing Must Farm within this landscape.

The stable isotope evidence is allowing us to think about this prehistoric environment and start to build a “conceptual map” of the different dryland and wetland areas. Can we start to identify potential places that the grains and seeds from the emmer, barley and flax could have been grown? Where would the nearest dryland areas suitable for grazing sheep have been? This is a complex process and involves examining a lot of data but helps us to think about the wider context of the site. At its foundation stable isotope analyses use atoms. Yet, from this minute scale we can then start to think in miles, on a landscape-wide level, exploring how the Must Farm settlement fits into the wider Fenland prehistoric context.